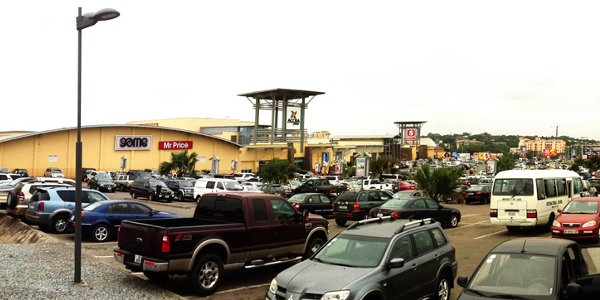 The 20,000m² Accra Mall (anchored by Shoprite and Game) has been performing relatively well this year, while overall sales in most modern shopping malls are well below historic averages.

In 2010 Ghana started offshore oil production and soon after established itself as one of the world’s fastest growing economies – with GDP growth reaching 14% in 2011 when global oil prices peaked. This, coupled with reports of a growing consumer class, has attracted numerous multinational retailers.

However, today things do not look as rosy. The plunge in oil and commodity prices has played its part in Ghana’s widening budget deficit, local currency depreciation and high inflation. An ongoing energy crisis has also added to the cost of doing business, and growth in 2014 and 2015 fell to 4% and 3.5% respectively. In April 2015 the International Monetary Fund (IMF) approved a US$918m three-year credit facility to assist the country with increasing debt.

Ghana’s economic woes have translated into a variety of challenges for formal retailers who are competing for sales alongside the dominant and deep-rooted informal shopping sector. According to a recent report by African commercial property services group Broll – titled Ghana, Retail Barometer Q2, 2016 – overall sales in most modern shopping malls are well below historic averages, despite garnering sufficient foot traffic.

“High inflation, rising fuel and other costs are pushing disposable income downwards impacting further on the performance of the retail sector,” notes the research.

Mall underperformance has led to retailers withdrawing, with some landlords introducing rent concessions. Construction on the 1,000m² LA Union has been stalled.

The company owns three modern retail centres in Ghana’s capital, including the 20,000m² Accra Mall (anchored by Shoprite and Game) which has been performing relatively better than competing spaces, according to Broll’s research. However, Teeroovengadum notes multinational retailers currently in the market have become more cautious.

“Ghana has been going through a tough economic cycle since 2014, just at the time when a number of new malls opened up in Accra over the last 18 months. A few retailers have seen a direct impact on their expansion strategy over that period whereby they are not signing for new stores in other new potential retail developments. They would rather ensure that their stores that have opened in the new malls trade well prior to signing for new spaces in Accra,” he explains.

“International players are also looking at the market and re-adjusting their product/pricing mix to cater for the real middle class, whereby we are talking more in terms of value products rather than high-end products.”

The major secondary cities, Kumasi and Takoradi, have also caught retailers’ attention for their potential first-mover advantage. Currently two formal retail spaces are being constructed in Kumasi, including AttAfrica’s Kumasi City Mall which is scheduled to open in the first half of 2017 and is already 80% let, according to Teeroovengadum.

“We believe our Kumasi City Mall will have the same success of Accra Mall when it opened in 2008, given that it will be the first mall in Kumasi… that will serve the city of Kumasi and also the Northern part of Ghana, and even a landlocked country like Burkina Faso,” he continues.

“It is a big city of approximately 2.5 million – equivalent to the city of Lusaka in Zambia that already has six A-grade malls.”

Takoradi Mall, developed by RMB Westport and scheduled to be completed by late 2017, has also commenced pre-letting. The port city has seen an influx of commercial activity since Ghana’s discovery of oil.

“At present this interest is dominated by international retailers and local retailers with foreign franchises… Whilst there is significant local interest in the secondary markets, this is trimmed by high rentals prevailing in the formal retail market, which limit effective demand.”

However, Teeroovengadum says there have been some improvements in Ghana recently, with economic forecasts for upcoming years looking more encouraging.

“The local currency, the Ghanaian cedi, has clawed back from a peak 4.8 to the US dollar to currently around 3.9 to the US dollar, and has been relatively stable. The government has managed to meet a number of the IMF requirements and the market is waiting for the general elections which is set to occur by end of this year.”