Many might find it hard to believe that Angola’s capital Luanda used to be the party capital of the central African region up until 1975, when the country gained independence from Portugal. 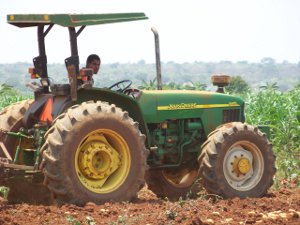 Working the fields at a project in Angola's Huila Province.

“Luanda was a place of fun,” says Pierre Sauveur, commercial advisor at TAAG Angolan Airlines, the country’s national carrier. “While Portugal was an underdeveloped European country, the fun was in Angola .  .  . Angola was the place where the Portuguese would really enjoy life . . . Movies would come out first in Luanda before Lisbon. New cars would be presented first in Angola before Portugal. They had race tracks; they had a very much developed society.”

At the time Angola had a thriving agricultural sector. The country was one of the world’s foremost coffee exporters. It also produced crops such as palm oil, cocoa and cotton, among various others. “Before 1975, Angola was an extremely productive place, both in terms of animals and crops,” notes Roger Ballard-Tremeer, chief executive of the South Africa-Angola Chamber of Commerce.

The good times, however, came to an end when the Portuguese left. For the following three decades the country was involved in a brutal civil war. The conflict destroyed much of the infrastructure and had a negative impact on business and the economy.

The return of peace in 2002 led to significant economic growth, albeit from a very low base. According to The Economist, Angola experienced an average annual GDP growth of 11.1% between 2001 and 2010, largely sustained by the oil industry. With very little manufacturing in the country, almost all products are imported and sold at prices up to ten times more as what they would cost elsewhere in the world.

The government has, however, committed itself to diversify the economy, with agriculture being one of the focus areas. “As the circumstances improved from 2002 onwards, so they were able to build into their national plan several agricultural projects. For example, [a number of] big irrigation schemes that had existed in one form or another were rehabilitated and they are all now being developed as productive entities,” says Ballard-Tremeer.

One of the projects initiated by the government is the Capanda Agro-Industrial Zone, situated in Malanje Province about 300 kilometres from Luanda. The project is next to the Capanda hydropower dam on the River Kwanza. The zone has a total area of over 400,000 hectares, of which 256,000 ha has been earmarked for rainfed agriculture and 13,500 ha for irrigation. Crops and livestock indentified for the initiative include soya beans, maize, cassava, sugar cane, cotton and dairy. There is also a very strong emphasis on processing activities.

Gesterra, the Angolan state owned agricultural enterprise, currently operates on the Pungo Andongo farm within the Capanda zone. The total area of the farm is 33,000 ha, although only 5,000 ha is currently under cultivation. Gesterra has planted maize, soya beans, rice and beans. Maize and feed mills have also been established.

The entire Capanda zone is managed by a special entity called Sodepac, whose responsibility it is to enter into negotiations with the private sector.

The project is being run on a public-private partnership (PPP) model. The Angolan government has already put in place infrastructure such as a railway line between Luanda and Malanje as well as road access to the zone. Electricity is available from the hydropower station. A nearby airport is also already in use. The exact details on how the PPP structure will work regarding shareholding is, however, still unclear.

The Development Bank of Southern Africa (DBSA) is also actively looking at the project. “We have paid a visit to Capanda to assess what is already on the ground . . . the policies that government has put in place to enable investment in agriculture, and also to identify the key players . . . What we will be doing now is working together with businesses and South African farmers to help put together vertically integrated agribusiness projects. We are going to be spending a bit of money to bring in a couple of experts that can help us do the necessary assessment on these opportunities, do the scoping of the projects as well as the feasibility studies and business plans,” says John Rocha, a manager of the Bank’s Spatial Development Initiative Programme.

Opportunities for the private sector

Rocha says Angola holds considerable potential for agribusiness. “The Angolan agricultural sector was completely decimated during the civil war. Before independence Angola was self sufficient in food production. At the moment everything, and I mean everything, is imported . . . So clearly there is an opportunity there.”

Ballard-Tremeer agrees, “Angola has many times the number of high potential agricultural land that South Africa, for example, has. And in Angola you don’t have to wait for the rain to come. So that is a good start.”

Inadequate infrastructure as well as nutrient-depleted soil are, however, some of the challenges farmers would have to deal with.

So how can companies get involved in projects such as Capanda? “What one needs to do, if possible, is to arrange to visit the facility and to meet people that may be looking for expertise, technology and investments. One can either sell expertise and technology packages into that project, or actually go and participate with an Angolan partner directly,” explains Ballard-Tremeer.

Rocha says that there is also scope for companies to get involved in the supply of services and inputs such as seed. “If [Angola is] going to succeed in attracting the relevant private sector . . . you need to ensure that the services are there. As part of the assessment that we are doing, we are beginning to look across the value chain and what the requirements are going to be. Our job is then also to introduce companies from South Africa or elsewhere who will provide those products and services, to bring them onboard so that we can close the missing links in the value chain.”