“If there was a tribe called resilient, I would be a member of that tribe,” says Kenyan entrepreneur Tamsin Corcoran. For over 20 years, Corcoran has been involved in the tourism industry. 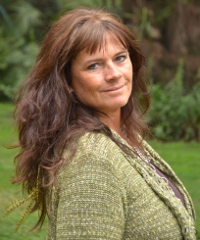 Corcoran’s first attempt at running her safari business failed after the Gulf War broke out in 1990.

“We realised we were just not making it. We weren’t getting bookings… we were going to get into debt. So, we decided to cut our losses and get out,” said Corcoran.

She decided to take another shot, despite repeated failures.

“I know how good it can be when it is good. I just know it can succeed,” she said of her repeated investment in the unpredictable industry. “Everyone in tourism… has to be resilient.”

Corcoran is the co-founder and managing director of New African Territories, a company that operates Delta Dunes Lodge and Kipalo Camp along the Kenyan Coast.

“I love being in the bush. I love creating these lodges. It is challenging and therefore it is fun,” she said. “I hate doing nine to five here [at the office in Nairobi]. I prefer to be at the top of a dune measuring out a new cottage or having a fight with the local chief.”

Corcoran is passionate about using her business to benefit neighbouring communities.

“We desperately need to conserve our heritage in Africa. But how do we do that with the people pressure? We make sure the communities around us are benefitting from the business. They get a bed-night fee and a conservation fee. Projects come out of that like funding for a school, borehole, hospital and scholarships.”

According to Corcoran, involving and benefiting local communities has made her business venture more worthwhile and interesting.

“It is not just a boring day-to-day job of running a lodge. If you start involving yourself in what is going on around you, it becomes much more of a challenge and more interesting. I don’t think, in the future, businesses will survive without community involvement,” she said.

Like other players in the tourism industry in Kenya, Corcoran and her business have been affected by tribal clashes, the 2008 post election violence and the recent fire at the Jomo Kenyatta International Airport.

“It is a very fickle business. You can’t control what happens. That is the biggest frustration; you can’t actually manage any crisis. If it is going to happen like the airport [catching alight], there is nothing you can do.”

But Corcoran has no intention of giving up.

“Through all difficulties we never even thought about closing the lodges,” said Corcoran. “There is a lot of charity involved in business in Africa. You are not just an employer. You are also the one who has to bear the brunt if something goes wrong with one of your staff or their families. You are the buck stop. You have a responsibility; if I close a lodge that is 40 people out of a job.”

With the growth of population numbers and the excessive construction of properties threatening to destroy some tourist attractions in Africa, Corcoran is optimistic that in the future the remaining well-preserved locations will be “precious”.

“There aren’t many places left in the world like the places we are involved in. There will come a day when those [places] are going to be so precious and you will be able to charge a million dollars to go there. It will have its heyday one day and it will make somebody a lot of money.”

In the meantime, Corcoran is focused on marketing the lodges to increase occupancy.

“We are marketing against the rest of the world… South Africa, Croatia, the Maldives, Russia. There is so much competition. You have to build relationships with your tour operators and get them to visit the properties so that they really understand the product and are able to sell it.”

One of the lessons Corcoran has learnt over the years is how to handle conflicts, emergencies and misunderstandings quickly and effectively.

“When things are not looking good or you are worried about a business partner, pick up the telephone and speak directly to the person. You can always sort it out really easy. Don’t use the email.”

Corcoran advised other entrepreneurs to invest in marketing, be innovative and creative and keep the African spirit of improvising.

“To make it in Africa you have to be resilient and entrepreneurial. If you like what you are doing, never be afraid to restructure, look at all your options and keep going. Don’t give up, especially if it is something you are really good at. I think being resilient in Africa pays off.”