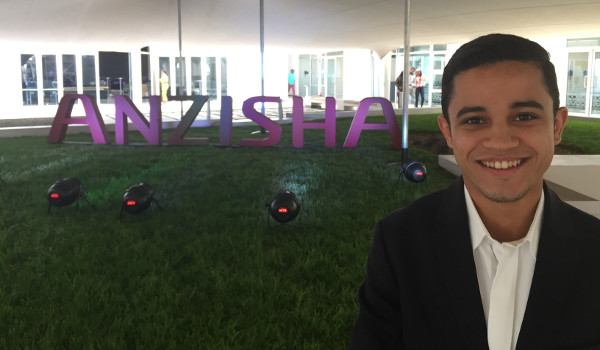 Mohamed El Idrysy, a 2018 Anzisha Fellow and founder of Health Solutions INC in Morocco outside the venue where the pitches took place at ALA

“The snails make the money.”

This is how 22-year-old Awah Ntseh answered a question from Ntuthuko Shezi, one of the judges at the 2018 Anzisha Prize pitch event, about which of his different ventures currently contribute most to his business’ bottom line.

Ntseh told the judges and the live streaming audience about his entrepreneurial journey. He started his Farmer’s Forte when he was only 14 years old – with 20 chickens and the dream of a poultry farm. Three years later, in 2017, he had 2,000 chickens. Unfortunately a wave of bird flu hit his home country, Cameroon, and destroyed almost 75% of his investment that year.

“I had to start over,” he said, but continued to demonstrate how that disappointment led to new possibilities, such as his current snail farm venture. Ntseh’s approximately 9,000 snails produce 280 bottles of mucin (snail slime), which the company sells as a beauty product due to its cosmetic benefits.

What was clear from each of the pitches presented by the twenty 2018 Anzisha Prize fellows, is that you are way behind the curve if you are in your 20s and only now beginning to think about your first business venture.

The world is increasingly serving up very young, successful and inspiring entrepreneurs, many of them still firmly in their teenage years or early 20s. Various studies are beginning to point to evidence that Generation Z, the generation born after the much dissected millennials, will drive a new wave of innovation as this tech-savvy and social media-infused, but goal-oriented generation create their own opportunities.

One such individual, 21-year-old Boluwatife Omotayo from Nigeria, found his business idea when he acted as the go-between for a friend with a broken iPad and a trusted repairer that he knew who operated in the computer market in Lagos – a place most locals distrusted due to being scammed one too many times.

“There are actually guys in that market that offer incredible services. Because I was familiar with the market, I served as a link between my friend who needed a solution for his gadget problem and for my other guy (in the market), who was not getting enough customers,” he told the audience. “My friend was happy, he told some other people, and after six months I was the most popular guy on campus for gadget solutions.”

Omotayo has now translated this evident gap in the market in populous Nigeria into a business opportunity. He created an online and offline platform, TabDigitals, that connects customers with trusted repairers for their digital gadget repair needs. He wants to train 500 female technicians in future in order to expand the repairer network that his company already has.

For this year’s Anzisha Prize, a partnership between the African Leadership Academy and the Mastercard Foundation, 632 applications were received. The final 20 fellows presented their existing ventures to the judging panel – Shezi (serial entrepreneur and founder of Scratch Mobile), Bita Diomande (co-founder and COO of Janngo), Chris Kwekowe (founder of SlateCube), Saran Kaba Jones (Liberian social entrepreneur and TEDGlobal 2017 fellow) and Polo Leteka (Executive Director and co-founder of IDF Capital, a South African based entrepreneurial financier and advisory firm) on the 22nd of October 2018.

Young entrepreneurs across the world vie for a slice of funding pie in various pitch competitions annually. The fast-paced world we live in has taken the classic “elevator pitch” to the next level, creating a pitch competition industry of its own.

The Anzisha Prize pitch day is slightly different. There is indeed a slice of prize money up for grabs, but the main purpose of the pitches – and the reason why they were live-streamed to an international audience yesterday (22 October 2018) – is to complete the circle of collaboration, demonstration and celebration that is at the heart of the philosophy behind Anzisha. Through the demonstration effect these young fellows have the potential to inspire an entire generation of African youth to choose entrepreneurship as a path.

“My mind is blown,” said Kaba Jones after the pitches concluded. “I am in awe of how inherently entrepreneurial the fellows are. It gives me hope for the continent,” she said.

“In 2018, our emphasis was on entrepreneurs who have a bias for action,” said Melissa Mbazo-Ekpenyong, Anzisha Program Manager. “Despite lacking resources, infrastructure and capital, the entrepreneurs we found used their creativity and internal drive to find unconventional means to bring their ideas to life.”