Organisers of the Anzisha Prize recently held a series of events in Kenya that reunited Anzisha fellows from years past and urged young people to enter this year’s prize. African entrepreneurs between the ages of 15 and 22 have less than o weeks to apply, with the application period closing on April 15. 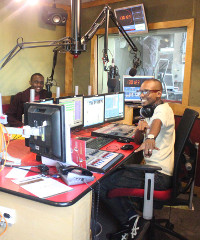 Past Anzisha Prize winners participate in a radio interview as part of the prize’s East Africa visit to encourage new applicants to apply this year.

Anzisha fellows drawn from East Africa were in Nairobi last week where they interacted with local entrepreneurs, participated in venture-building workshops at the headquarters of Kuza Biashara, held radio interviews at top Kenyan radio stations, and had team building sessions that involved ice skating and rock climbing.

The Anzisha Prize is the continent’s premier award for entrepreneurs between the ages of 15 and 22 years who have started and are actively running innovative social ventures or for-profit businesses with potential.

In addition to over US$75,000 in cash prizes up for grabs, 12 finalists will win an all-expenses paid trip to South Africa to be a part of a week-long entrepreneurship workshop and conference at the prestigious African Leadership Academy in Johannesburg.

“To my knowledge, there isn’t a larger opportunity for young entrepreneurs on the continent. Not only do we provide access to major funding but, even beyond the monetary award, fellows get access to a network of young African entrepreneurs across the continent, as well as the African Leadership Academy Network,” adds Achebe. “We provide them with a support system to aid their growth for years to come.”

Achebe says the Anzisha Prize is looking “for young entrepreneurs with potential” who are using their skills and talents to make an impact in their communities.

“They don’t necessarily have to have everything figured out. They have to be motivated to do really good work and impact people in a positive way. We are looking for young people who have that intelligence, that drive, that hunger, and that passion for what they are doing but also compassion for others. We think those are the components of great leaders and entrepreneurs.”

“I won $30,000 and it helped me in financing our research and development. Many people who were not buying from me are now my customers because of the Anzisha network,” says Mupuya. “Young people who are engaged in enterprises that uplift lives in their communities should apply to this prize because it will expose them to a network of people who can help transform them and their businesses.”

The Anzisha Prize winner has trained over 500 individuals, mostly young people, on how to make paper bags through which 16 other projects have been set up. Since the Anzisha Prize, Mupuya has gone on to receive further awards and recognition, including a feature on Forbes and CNN.

The need to support young entrepreneurs

Achebe says young African entrepreneurs have the potential to transform the continent, but they face many challenges.

“There is still a lot of ageism. There is not much encouragement for people doing things that are not academic. There are a lot of young people who have chosen the road less travelled and we believe that it is important to empower young people to not only go to school and hope they get a good job, but rather to actually go for what they want to do and  create economic opportunities for other people,” she adds.

“Young people need to be taken more seriously on the continent than they are right now and we are putting our money where our mouth is by taking them seriously, by giving them access to $85,000 in capital and a support system to help them grow, achieve their dreams, and make a positive impact in their communities and economies.”

Achebe believes the impact of the Anzisha fellows on Africa’s future will be “powerful”. In 20 years, she says, they will be running successful enterprises, employing thousands of people and leading nations and big corporations.

“There is going to be the next Google of Africa within the Anzisha network. I am convinced there will be major conglomerates and not only will they be successful entrepreneurs but they will also be motivated by the right values. They will be effective leaders. Ideally they will turn around the leadership issue we have in Africa.”