The small town of Oranjemund in south-western Namibia, just across the border from South Africa, was established to service the area’s diamond industry. 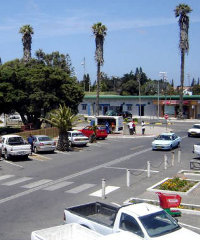 A proposed new power project could have a positive impact on Oranjemund’s economy. Photo: Oranjemund Online

Oranjemund’s economy could receive a significant boost if a new natural gas-to-power project goes ahead as planned. The offshore Kudu gas field is located about 170 km from Namibia’s coast. The plan is to build a pipeline from the gas field to an 800 MW power plant 25 km north of Oranjemund.

Construction on this ambitious project is anticipated to start next year and it could come on stream in 2017. It is envisaged that the plant would have a positive impact on Namibia’s energy security by reducing dependence on imported electricity.

One person who is certainly seeing business opportunities in the Oranjemund area is Deon Landman, country manager of DHL Express in Namibia.

“I’m now looking for office space down there. We are looking to move down there and support the initial project because there must be business for us there. This is probably the most exciting thing going on in the country right now.”

The Namibia Power Corporation has encouraged local sub-contractors to take advantage of the various opportunities that the project will be offering through the provision of goods and services, particularly during the three years construction period of the gas field infrastructure and the power station.

Landman told How we made it in Africa that Namibia has a number of other important business centres in addition to the capital Windhoek.

Namibia’s major port is Walvis Bay. The port is being used to service oil rigs from Angola, which have been a major boost for the local economy.

Just 35 km north of Walvis Bay is Swakopmund where business is mainly dependent on the nearby mining industry.

Landman said the northern towns of Oshikango, Oshakati and Ondangwa (often referred to at the three Os) are also experiencing a lot of commercial activity with informal traders from Angola coming down to buy goods to re-sell them north of the border. Many retailers have capitalised on this informal trade by establishing outlets in the north of Namibia.

About 400 km by road north of Oranjemund is the town of Lüderitz. Landman said that although this is a good place to have a presence, business in the town can be sporadic. Lüderitz recently benefitted from oil exploration in the area.

One of Africa’s best kept secrets

He explained that despite Namibia’s small population of just over two million people, companies should still take this market seriously.

According to Landman, Namibia’s customs and excise regime is one of the most progressive in Africa. “There are little barriers to trade. If you combine that with the good infrastructure, there is a lot of opportunity to create a mini hub here for distribution or shipment into the rest of the continent. Right now we are involved with a project with a pan-African bank, where we bring their material in, configure it for the other countries in Africa, and send it out.”

He added that Namibia is one of the continent’s best kept secrets. “Everything works here – roads are good, infrastructure is good, the government is willing to talk to you. There is absolutely minimum corruption.”