President Umaru Musa Yar’Adua is dead after a long illness. He passed away on Wednesday night in the presidential villa, Aso Rock, Abuja.

According to a government statement, “the Acting President, Goodluck Jonathan, received news of the passage of President Yar’Adua with great shock and sadness.” 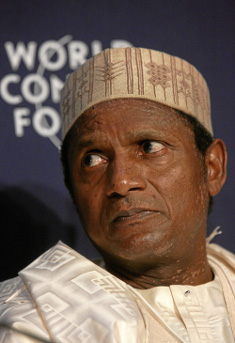 “Nigeria has lost the jewel on its crown, and even the heavens mourn with our nation tonight,” Jonathan said.

Jonathan described the death of the president as sad, unfortunate and regrettable. “As individuals and as a nation we prayed for the recovery of Mr President. But we take solace in the fact that the Almighty is the giver and taker of all life.”

Jonathan offered heartfelt condolences to President YarAdua’s widow, Hajiya Turai Yar’Adua, the entire Yar’Adua family, the people of Katsina State, and Nigerians both at home and the world over.

As a mark of respect for our departed leader, the Acting President has cancelled all official engagements. He has also declared a national mourning for seven days. During this period, the Nigerian flag will fly at half mast.

The remains of the President would be laid to rest in Katsina on Thursday, 6 May, 2010, at 2pm. Nigerians are to observe the day as a work free day.