The rapid growth of mobile telephony in Africa has been covered extensively over recent years. According to the African Economic Outlook report, in 2011 the continent had just over 61 mobile lines per 100 people. 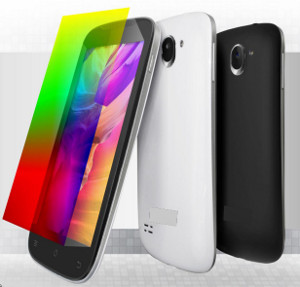 An image of the new smartphone

The majority of mobile phone users however, continue to use more basic feature or ‘dumb’ phones. A recent article by the Financial Mail suggests that smartphone penetration in Africa is less than 20%.

Seemahale, a telecoms and broadcasting infrastructure and services company, also agreed to acquire a 51% stake in CZ Electronics Manufacturing that currently produces circuit boards for a variety of industries.

The company plans to sell its yet unnamed smartphone for about R2,500 (about US$250). For this, consumers will get an Android-powered handset with a 5-inch LCD screen. In addition, the phone will have a five megapixel camera and a battery that can last “over a day on a full charge”.

Seemahale chairman Dr Thabo Lehlokoe told How we made it in Africa that while there are already many smartphones aimed at the lower end of the market, few offer the combination of features and price proposed by his company.

“We have a lot of people in Africa whose only way of accessing the internet is through a mobile phone of some sort, and the vast majority of them are not using smartphones, they are using a feature phone that has some capability of accessing the internet… People don’t just go onto the internet for Facebook and Twitter and email but actually to browse and look for information… to be able to watch videos and those types of things. So we felt a 5-inch screen was a big enough screen for people to do a lot on the internet,” said Lehlokoe.

According to a recent Reuters article, many of Seemahale’s phone components will come from Asia. Until factory workers are more familiar with the production process, the phones will be imported part-assembled. As time goes on more of the assembly will be done in South Africa. The company also plans to source as many components locally as possible.

Competing with the large players

Over the past years Africa has seen the emergence of a number of phone companies taking on the multinationals players. Mi-Fone – headquartered in Port Louis, Mauritius – targets low income earners in Africa with its handsets that sell at between $12 and $100.  Tecno, a Chinese company with an exclusive focus on the African market, claims to be one of the continent’s fastest growing mobile brands. It also has a manufacturing plant in Ethiopia.

Seemahale aims to go north of South Africa’s borders and target consumers across the continent with its devices. Next month the company will attend the AfricaCom conference in Cape Town, South Africa with the goal of meeting some of the continent’s mobile network operators.

How is the company able to offer its smartphone at such a relatively low price? “Remember we don’t have the huge overheads that Samsung has… We are a very small player that is looking at very modest numbers… we don’t have to recoup a huge overhead infrastructure to enable us to still be competitive,” Lehlokoe explains.

To illustrate his point, Lehlokoe uses the mining industry as an example. “You take a company like Anglo American. They could close a mine because it is not profitable for them to run that mine, but a smaller company can come in and run that mine very profitably because of the difference in overhead cost structure… For us to become profitable… we don’t have to sell hundreds of millions or tens of millions to break even, we need small numbers.”