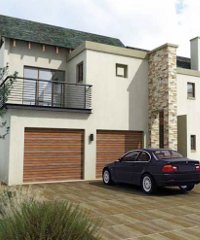 An artist's impression of one of Roma Park's residential units.

The developer behind the project is CDP Properties – a joint venture between CDP Investments and Renaissance Partners, the principle investment arm of Russian-based Renaissance Group.

Charles Davy, managing director of CDP Properties described Roma Park as the first development of its kind in Zambia and said it is expected to attract local and foreign investment. “By using Zambian and international architects and experts for its design and construction, Roma Park will create a residential and corporate address of international standards, with long-term investment value,” he noted.

The project, situated six kilometres from Lusaka’s central business district, will be developed in two phases over five-to-seven years. According to the developers it will be home to between 500 and 1,000 residents.

The development is the first private commercial property to be zoned as an Industrial Park in Zambia, under the Zambia Development Agency (ZDA) Act of 2006. The act is aimed at promoting the manufacturing sector, in particular, in an effort to diversify the country’s economy. Roma Park is also being backed by the ZDA and the Zambian government.