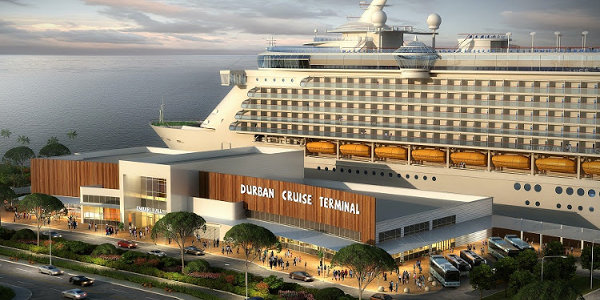 A rendered image of the proposed Durban Cruise Terminal.

While sub-Saharan Africa is on the map for foreign investors in many other sectors, the cruise ship industry mostly passes the region by. It is hoped that this situation could change once the new Durban Cruise Terminal opens for business.

According to Andrew Pike – head of the ports, terminals and logistics division at law firm Bowmans – the facility, expected to be completed in 2019, could be just what the African cruise industry needs. He heads the Bowmans team advising KwaZulu Cruise Terminal (KCT), the preferred bidder for the tender to develop and operate the project.

How we made it in Africa asked Pike about the expected economic impact of the terminal and opportunities to grow the regional cruise industry.

MSC Cruises SA, part of one of the world’s largest passenger liner operators, is a joint-venture partner of KCT, the entity that will build and operate the new Durban Cruise Terminal. However, MSC already operates a number of cruises from Durban, which raises the question whether the terminal will give preference to MSC, or if it will accommodate all operators equally?

No, the terminal concession will be offered on a common-user basis, meaning that the terminal operator, KCT, will be obliged to give reasonable equality of access to any cruise liner wishing to use the terminal. Accordingly, there can be no positive discrimination towards MSC Cruises ships.

Is the rationale behind the new terminal to: 1) Entice operators to develop entire new cruises that stop at Durban; 2) Motivate those currently passing Durban to dock at the city; or 3) To give passengers of liners already stopping at Durban an improved experience?

Ideally, and as far as possible, all three, but the principal motivation at present is to improve the experience for passengers already passing through the existing terminal at N-Shed. The existing terminal is not a world-class facility and the new terminal will give them a far better experience. This in turn will hopefully drive other cruise operators to call in Durban on an ad hoc basis or even to schedule new cruises to Durban because of their confidence that they will be received in a world-class facility. So the bigger picture is to increase tourism to Durban.

Is one modern cruise terminal enough to lure operators to the southern tip of Africa? Don’t you need facilities such as these all along the coast of the continent?

One may be insufficient, but it provides an anchor for cruises on the African coast. Once there is one modern terminal in southern Africa which is successful, it may well prompt other cruise operators to develop similar, or at least complementary, facilities in other jurisdictions such as Mozambique, Tanzania and Kenya.

How will the new cruise terminal impact Durban’s economy?

In the short term there will be some employment creation during the construction phase. In the longer term there will be further employment and tourism benefits as the new terminal will have a retail component and will also link through to the Point precinct, meaning that the terminal plus all of the other facilities in the area become an attraction for tourists and boost local businesses.

One would also hope that the whole package will result in increased passenger throughput and consequently provide opportunities for tour operators into the greater Durban and KwaZulu-Natal province, such as Valley of a Thousand Hills tours, eco-safaris to small reserves in the area, and of course increased pedestrian traffic through markets such as Wilson’s Wharf, Victoria Street Market and the like.

Overall, the facility will put Durban more on the map for foreigners who know nothing about the city. CNN once described Durban as “The coolest city you’ve never seen”. The new terminal will get Durban seen and, whether foreigners pass through the terminal or not, word of mouth from those terminal passengers will provide a strong boost for Durban tourism.