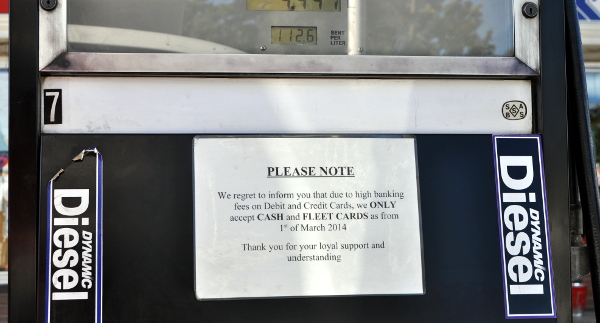 Tourists travelling Namibia have to use their cash sparingly as ATMs at tourist destinations often do not work, and many shops and fuel stations in smaller towns only accept cash.

Last month, three friends and I crammed a couple of tents and other camping necessities into the back of a car and headed out north from Cape Town to Namibia. The country is a trouble-free holiday destination for South Africans as visas are granted on entry and the rand is accepted as legal tender (it is also pegged one-to-one with the Namibian dollar).

Namibia is known for its vast, untouched, open spaces – as well as its big game, plateaus, record-high dunes, rock paintings and wild desert horses (believed to be decedents of cavalry horses abandoned by the German military in the early 20th century). Some of these sights we were familiar with, like the iconic red dunes of Sossusvlei (featured as a Windows desktop wallpaper for years) and Deadvlei (a cracked, white, clay pan holding a forest of dead camel thorn trees in the middle of desert). But the country’s natural beauty surpassed our expectations – it is amazing how quickly the scenery seemingly transformed from desert to green grasslands to mountainous landscapes.

Tourism is a powerful contributor to the Namibian economy (which is still heavily dependent on mining) and an important job provider. The country is teeming with khaki-dressed tourists – mostly Germans due to its colonial ties – who bring in sought-after foreign currency. However, I couldn’t help notice how difficult it is for them to spend it.

For example, we found ATMs at tourist attractions were often out of cash or would not accept foreign cards (at least not ours from South Africa). We also struggled to pay by card at some restaurants and kiosks, but the most frustrating was that many fuel stations only accepted cash. This meant that we had to travel long distances with large amounts of banknotes, which we often elected not to spend just in case we found ourselves unable to draw more at a later stage.

The offering at many of the tourist restaurants and shops was also limited with plenty of empty shelves – which did not encourage spending. There were many instances where we would have spent money but couldn’t. For example, after discussing the mark-up of the price of a Magnum ice cream at tourist rest stops (ranging from R35-R45, compared to around R25 in South Africa) we ended up deciding to splurge and buy one – only to find the shop’s ice cream fridge to be empty.

We also found booking camping sites at some destinations to be a bit chaotic. All accommodation bookings in Namibia’s national parks are managed by the state-owned Namibia Wildlife Resorts. At one particular resort we were told that our desired dates were fully booked. But after talking to another agent, we were told there was indeed space available. After we checked in we found plenty of empty campsites, and wondered how many others were turned away because they believed accommodation to be booked out.

The Ministry of Environment and Tourism is also the only body that can issue permits to enter all Namibia’s state-run parks and reserves. We tried calling them on numerous occasions to find out how we could get a permit to camp in one of these parks – but with no luck. The phone was only picked up once, and then the receiver quickly hung up.

While it is fantastic that Namibia’s national reserves are not overly commercialised (and this is part of their beauty), the government could do more to utilise its tourism potential and tap into visitors’ wallets. Namibia will continue to be a country tourists will want to visit – with or without the challenges of accessing cash. But encouraging them to spend more would improve Namibia’s tourism “yield”. It is one of the most unequal economies in the world, and tourism could play a strong role in addressing this. If conservation efforts could be matched with business acumen, the country could definitely get more out of its tourists.