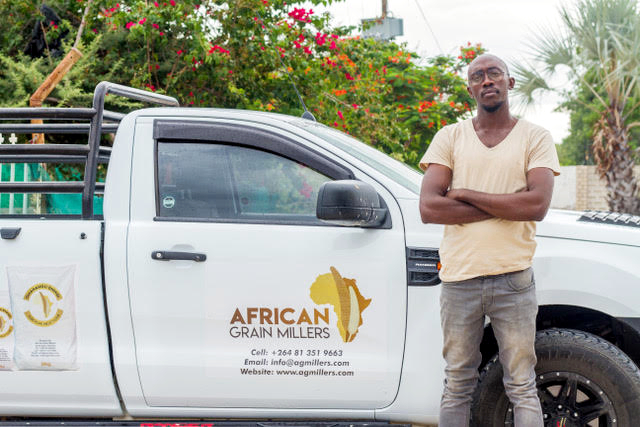 Eben Ngula, 29, grew up in the town of Ondangwa in the north of Namibia. The villages in this part of the country are characterised by the waving heads of mahangu before it is harvested in May or June of every year. Mahangu is a hardy and drought-resistant pearl millet (a cereal grain that belongs to the grass family) indigenous to the region.

Ngula knew the majority of the people living in the rural villages around Ondangwa always have excess mahangu that they look to sell to local millers to make flour. “After harvest, they always have grain stored throughout the year. I realised availability would not be a problem for a milling business,” Ngula explains.

It was while he was a production manager for Namibia Grape Company in the south of the country near the Orange River, that Ngula conceptualised and planned his venture. In June 2020, African Grain Millers was founded.

“I’d always wanted to venture into food production, specifically a product the majority of the population consumes. Initially, I thought about eggs but they perish quickly so I decided on mahangu flour,” he says.

Ngula studied agriculture at the University of Namibia but admits his four years at Namibia Grape Company is where he mastered the ins and outs of food production. “I never knew exactly where to start. At Namibia Grape Company, I learnt about food safety, food protocols, everything about packaging, even export and logistics.”

He wanted to move back north because he missed his home and he was ready for a new challenge. Before resigning, he put the branding of his new company in place and finalised the registration. This took longer in a year when regulatory officials needed to social distance and stay home under various Covid-19 lockdowns in the country.

Using money he had saved up over four years of receiving production bonuses from Namibia Grape Company and supplementing these funds with a personal loan from the bank, Ngula procured the required machines, packed up everything and moved back home.

Ngula never wants to relive those first couple of weeks after the company manufactured and packaged its first products. He reached out to retailers, delivered sample packages, and contacted them constantly to try and get his product to the end-customer, often not hearing back from them at all.

Vowing to not become disheartened, Ngula approached smaller retailers near the company’s base in Ondangwa. These shopkeepers were eager to stock his product but did not have the cash flow to pay upfront. “I had to adapt my strategy and provide the stock on credit,” Ngula says.

He also added another distribution channel to boost sales. “We have this initiative where individuals act as our agents. I send them the products at wholesale price and they provide it to tuck shop owners in the community.”

Since those first couple of weeks, things have picked up and now, six months later, African Grain Millers has had to boost production by adding a second shift. “The orders that have come in have surpassed my production capacity, currently just short of two tonnes per week. We have divided the current team into two shifts and are producing almost 24 hours a day,” Ngula reveals.

An early lesson he learnt is not to overpromise in the quest to win over customers. The company received an order close to the capital city, Windhoek, and agreed on a delivery date. It started raining and Ngula discovered the one delivery vehicle had a leak, which would compromise the mahangu during the transportation process. African Grain Millers could not deliver on time. The company now factors in additional time for larger orders to protect the integrity of the brand. 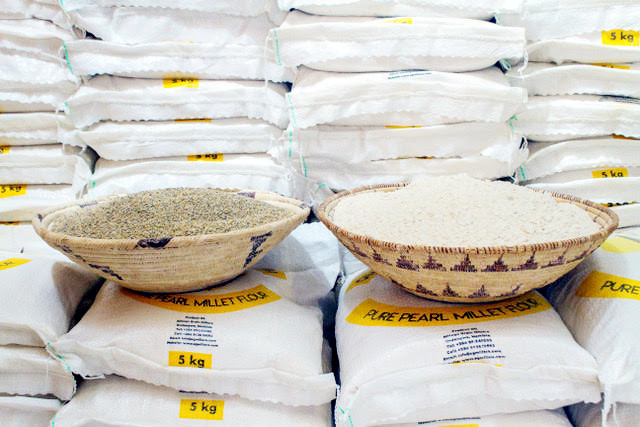 Processing a product in demand

African Grain Millers receives its supply of mahangu from the local farmers in the community. These growers approach the company, who then sends someone to evaluate the size and quality of the grain before agreeing on a price for the purchase.

Some of the growers bring their grain to the warehouse facility where the processing takes place and African Grain Millers also uses its own vehicles to collect the procured product. It cleans, grinds and mills the mahangu and packages it for delivery to the retailers and agents.

While there are other mahangu millers in Namibia, Ngula believes his company has a distinct advantage to become the brand of choice.

Firstly, he says, the company produces mahangu flour of higher quality because its milling process is slower. “We take our time to process and this makes for a finer bag of mahangu.”

He also believes the company has an edge over the competition due to its extra emphasis on marketing through various social media platforms.

Ngula says mahangu is in demand thanks to its historic prevalence in the community. “More than half of the population prefer mahangu over the alternatives.”

While agents are currently bringing in orders, established retail is where growth lies and takes up the majority of African Grain Millers’ production capacity.

The company has managed to secure some shelf space in the local stores of major retailer Spar, as well as independent outlets in the northern towns of Tsumeb and Otjiwarongo.

Ngula is already planning to procure more machinery and appoint new employees (currently the company has a team of seven) in the next quarter to support the growing demand.