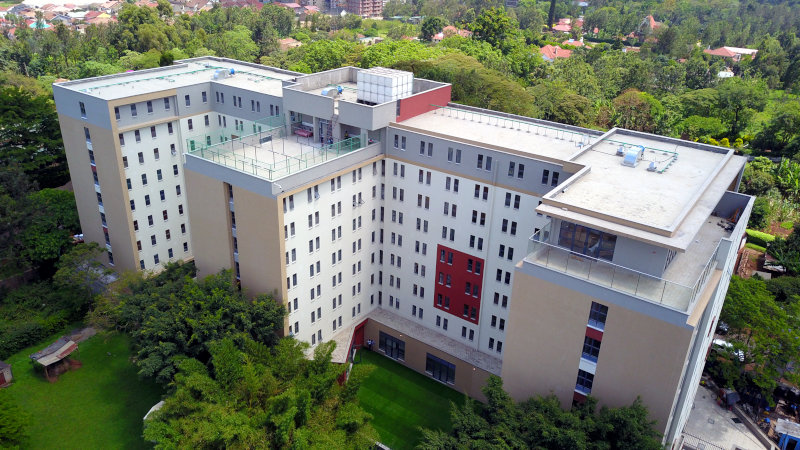 This article was first published by Cytonn, and has been slightly shortened. View the original here.

Some of the factors that have driven demand for student housing in Kenya include:

A few private sector players have taken interest in the concept of student housing, with institutional investors focusing their investment grade portfolio within Nairobi County. The key market players are shown below.

Incoming supply of student housing over the past two years has been limited by the Covid-19 pandemic which presumably slowed down the investment volumes and brought about the trend of online-learning which further limited demand for student accommodation. However, as vaccination programmes accelerate to manage spread of the virus, the market has witnessed growing investor confidence and initiative in unlocking growth opportunities. One of the major moves that have been witnessed in the Kenyan market is Acorn Holdings’ listing their Development REIT (D-REIT) and Income REIT (I-REIT) at the Nairobi Stock Exchange in February 2021.

We conducted research and analysed data of 10 areas in the NMA namely: Parklands, Madaraka, Ruiru, Kahawa Sukari, Thome, Juja, Rongai, Athi River, Karen, and Thika. The student housing market in Kenya comprises of studio units and shared units of up to eight beds, with the most stock of shared spaces being that of two beds in a unit. These facilities have continued to offer amenities such as tuck shops, back-up generators, CCTV and 24/7 security teams, secure biometric access, common rooms with DSTV, gyms, and game rooms, laundry machines, separate study rooms, and some even offer shuttle services. The rents for purpose-built student accommodation (PBSA) range from Kshs 10,000 with the highest in the market currently being Kshs 34,000 per month.

The key take outs include: 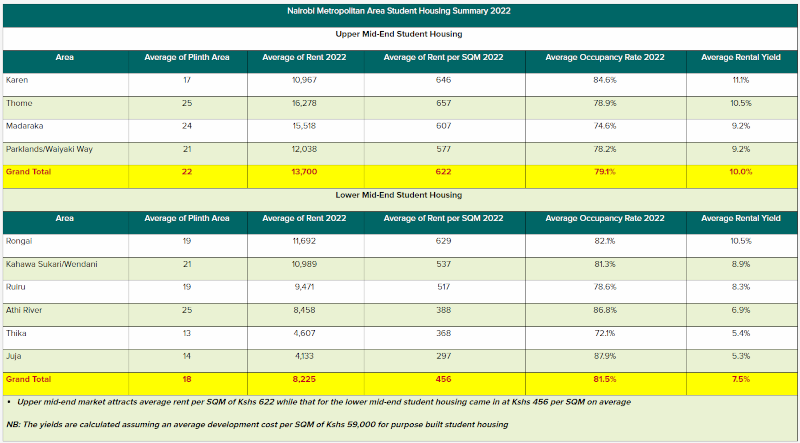 Rental rates: Thome and Karen Estates attracted the highest rent per SQM at Kshs 657 and Kshs 646, respectively. These areas host top tier private universities such as Catholic University of Eastern Africa and United States International University thus attracting students largely from the middle class and high-income families. Generally, the average monthly rental rates fluctuate based on location, the type of institutions targeted, which tend to warrant differences in terms of the quality of student housing and amenities expected by the students. Additionally, hostels within Nairobi County tend to charge higher than satellites owing to the relatively high land costs, which are passed onto the tenants.

Amenities: Rental properties in the off-campus market offer a number of amenities, many of which are absent in on-campus housing. Three amenities that are available off-campus and almost non-existent on campus include: hot showers, wireless internet access and DSTV.

Occupancy rates: The low mid-end segment registered a higher average occupancy rate averaging 81.5% compared to upper mid-end areas with 79.1%. This is because the former tend to attract more student populations owing to their affordability with some opting to commute.

In comparison to other asset classes within the real estate sector, student housing posted a relatively high rental yield averaging 7% and surpassing serviced apartments and residential sectors which recorded 5.5% and 4.8% as at 2021, respectively, as shown below.

For purpose-built student accommodation to be more attractive to students and enable investors to benefit from high occupancy rates and consistent rental income, we recommend that investors should:

Investment opportunities in the Nairobi Metropolitan Area lie in areas such as Karen, Thome and Madaraka with relatively high rental yields of 11.1%, 10.5% and 9.2%, attributed to the areas hosting private universities in Kenya popular with international students.