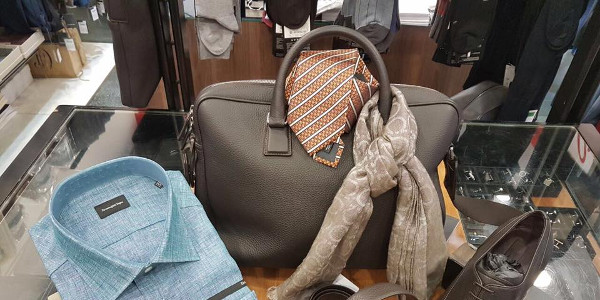 Little Red is a family-run, luxury-brand clothing store in Kenya, and has been around for more than 60 years. It stocks labels such as Hugo Boss, Armani, Brioni and Ermenegildo Zegna. There was a time, however, when it struggled to get an audience with some of these brands.

Aziz Fazal is the managing director of Little Red and a third-generation owner of the company. He tells the story of the family firm, starting when his grandfather opened the first shop in downtown Nairobi in the early 1950s. It bore his name, Abdulla Fazal & Sons, and traded in second-hand clothing.

After almost 20 years, the store was passed to Aziz’s parents, who soon faced a crisis – the Kenyan government cracked down on the importation of worn clothing to protect an ailing local textile market.

This warranted a change in strategy, and so the company looked into importing new clothes from Europe.

Taking the store to the next level

In the early 1980s Aziz and his brother Karim took over, and the business was rebranded Little Red. It was the brothers’ intention to reposition the company as a top-end fashion retailer.

Exclusive distributorship of the world’s leading fashion brands would expand and grow the business, they knew – but, as Aziz explains, it was one of the biggest risks they could have taken.

“Hugo Boss was the first brand we contacted then and initially we couldn’t even get an audience with them. They still viewed Kenya as a negligible market and we had to convince them that the market was ripe.

“Unbeknownst to us, they were also doing their background check on the market and with time they granted us an appointment,” he says.

“That marked a turning point for us and since then we have been able to acquire some of the top-scale global fashion brands available in major fashion capitals.”

Currently, the business operates stores in upmarket areas of Nairobi and serves the top tier of the fashion market on the continent, with 30% of its customers coming from outside Kenya. Many of the store’s clients have stuck with them over the years – according to Aziz, Little Red is now dressing its fourth generation of customers.

Gaining exclusive rights to a brand is costly, but can mean lucrative returns, as Aziz explains: “Most of the global brands invest huge budgets into marketing and brand positioning, hence making it easier for us locally, as the majority of our customers are well-travelled and are exposed to these brands.

“We are on the international delivery system for all our labels, which means that we get all the new collections delivered as soon as they are released. We guarantee you the same brand experience and merchandise as would get in any other store across the globe.”

What to look for in a luxury label

Aziz points out that some of the key considerations when acquiring a brand are based on the company’s existing product portfolio. New brands have to be in tandem with those already in the shops.

“We look at the value the brand is going to bring into our existing offering, and avoid getting into partnership with brands that would erode the value of what we already have on offer. These brands end up complementing each other in-store as opposed to competing with each other,” Aziz says.

In addition to the loyal customers who have been with the company for generations, Little Red relies on referrals to gain new shoppers.

One draw card is its ‘made-to-measure’ service, where – four times a year – leading international designers are flown to Kenya to take measurements and tailor-make bespoke suits for select customers.

The company also collaborates with like-minded brands to enhance the customer experience and open customers to other products that might appeal to them. Recently, it partnered with a luxury vehicle brand, launching the clothing store’s summer collection at the same time as the car company unveiled its latest model.

Although the company engages in social media marketing, Aziz explains that this is not so much to generate instant sales as to help Little Red gain relevance and generate excitement for the brand among the young people who will ultimately be its future customers.

Evolution of the customer

The distribution of disposable income among customers has changed over the years. In the 1980s it was only those in their late fifties who had ready cash, but in recent years the younger generation has had more money to spend.

This has introduced a younger crop of customers to the business, with tastes that are different from those of their parents. With this in mind, the business has also been sourcing merchandise that appeals to a younger market.

In fashion, products have a very short life span. Aziz mentions that they make sure they purchase items in smaller quantities to avoid getting caught with dead stock. This also helps them keep track of their cash-flow demands.

A few years back, the company had to cancel a contract with one of the leading Italian designers as the brand wasn’t well understood and did not resonate with the target market.

The appearance in the local market of counterfeit items bearing the logos of leading brands also affects sales and even the brand image in the long run, when, for example, customers are duped into buying an inferior item bearing a logo they have come to trust. However, Little Red is at liberty to take action against any counterfeit items for the labels it stocks, in liaison with the brand owners and the relevant authorities.

The company is looking into opening shops in new east African markets. However, Aziz is quick to point out that this will only happen once Little Red has consolidated its position in Nairobi, the main hub for the region.

Plans are underway to introduce new brands aimed at the younger consumer and to open a department store for Kenyan fashion houses. In addition, Aziz says, the company is considering entering related industries, such as home furnishings and fine dining.