Cassava is the second most consumed source of carbohydrate in sub-Saharan Africa, but the crop’s industrial potential has been largely unexploited. 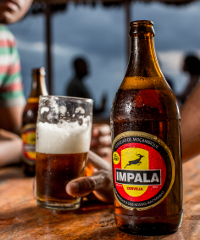 Cassava is a woody shrub with an edible root that looks like a large sweet potato. Although cassava roots can be processed into a variety of products – including cassava flour, starch, ethanol and glucose syrup – the crop has not been a great commercial success in Africa. The reason for this is because around 70% of the root consists of water, which makes it uneconomical to transport over great distances. While the cassava root can stay in the ground for many years, once it is harvested, it needs to be processed very quickly before it goes bad. Cassava processing plants therefore need to be situated close to the growing areas.

However, some of the world’s largest alcoholic beverages companies are finding ways of tapping into the potential of cassava. Both SABMiller and Diageo have over the past two years launched commercially-made cassava-based beers in Africa.

SABMiller was first off the block with its Impala brand in Mozambique. In March this year the company also rolled out the concept to Ghana, where the beer is brewed by SABMiller’s local subsidiary Accra Brewery Limited, under the Eagle brand name.

Towards the end of 2012, UK-based Diageo also launched its own Ruut Extra in Ghana, which is made predominantly from cassava raw material.

Both SABMiller and Diageo source their cassava from small-scale farmers. “It’s been a win-win really. Seven thousand farmers are connected with this secure market, we connect them with a secure market, they are guaranteed that we buy their output, and it is really working,” said Ekwunife Okoli, managing director of Diageo’s Africa Regional Markets division, at a recent conference.

To overcome the challenge of transporting cassava over large distances, SABMiller has partnered with Dutch organisation DADTCO, which has developed a mobile cassava processing unit that can travel to the cassava growing regions. Basic processing is therefore done in the rural areas.

Both SABMiller and Diageo’s cassava beers are priced at less than their mainstream offerings and aimed at the lower end of the market. This lower price is partly achieved by negotiating better tax rates with governments for using locally-sourced inputs. “Using cassava and accessing some government incentives for local raw materials’ utilisation has given us duty relief, which has allowed us to sell this at 35% discount to mainstream lager brands,” said Okoli.

The majority of alcohol consumed in Africa is still in the form of home brews or illicit liquor – products on which governments can’t collect any tax. By bringing more customers into the formal beer market, government tax revenues are therefore increased.

According to Okoli, Diageo will roll out more cassava beer brands, as it negotiates tax incentives with governments. “Does the concept work outside of Ghana? Absolutely, but it involves sitting down with the government and discussing and getting opportunities for tax reduction,” he said.

Despite the abundance of cassava in many African countries, sourcing the required inputs from thousands of small-scale farmers remains a challenge. “Yes, there is a lot of cassava, but there is a lot of cassava in small minute batches owned by hundreds of thousands of people who you can write contracts with and all of that. In order to structure that into a commercially viable supply chain takes a lot of development and that’s what we’re currently doing. So, even in Ghana, we’re not getting enough supply,” said Okoli.