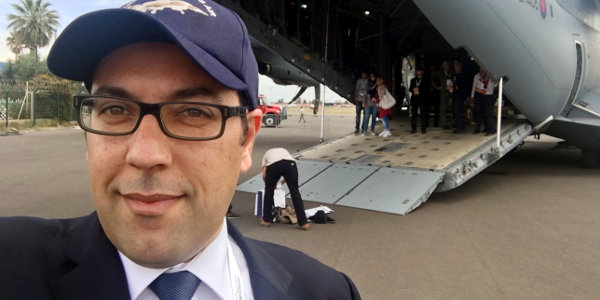 As a young child growing up in Morocco, Badr Idrissi would regularly take apart his household’s television or VCR in an effort to understand how it worked – often to the frustration of his family.

His love for technology later drove him to complete a telecommunications engineering degree, and work at global giants such as Microsoft, Nokia and Siemens.

Idrissi is a 2017 Innovation Prize for Africa finalist for developing pioneering artificial intelligence software to manage the operations of environment-defending drones. The venture was inspired by his concern about the environmental and ecological threats (such as illegal fishing, poaching and deforestation) facing many African countries. For instance, a large percentage of fishing activities off the West African coast are illegal, resulting in huge economic losses.

“Illegal fishing is a worldwide phenomenon but it is more dramatic for African countries. For West African counties, for example, illegal fishing costs governments US$1.4bn every year and is destroying 300,000 jobs, according to the Overseas Development Institute,” Idrissi explains.

Part of the challenge is that African governments cannot afford to survey large territories.

“For instance, in West Africa we don’t have the capacity to have satellite surveillance on the sea for each square-kilometre and we don’t have the money to have many search boats and aeroplanes monitoring the area and so on,” he notes.

Idrissi’s answer is drones (or unmanned aerial vehicles) – which cost a fraction of the price of traditional surveillance planes. In 2015, Idrissi and a friend, Younes Moumen, started developing artificial intelligence algorithms for drones to allow them to identify illegal economic activities (such as unauthorised fishing, smuggling, poaching and deforestation) and instantly alert relevant authorities. These algorithms guide the drone to respond to various scenarios – like following suspicious boats to track their course.

Last year Idrissi and Moumen co-founded ATLAN Space, the tech company responsible for marketing and selling the artificial intelligence software. While they haven’t monetised it yet, Idrissi says the company is in advanced talks with various potential clients.

“Our target market is governments, like ministries of fisheries, forestry and environment, and NGOs like the African Wildlife Foundation.”

He adds that using drones installed with ATLAN Space’s software costs about a third of using piloted light aircrafts.

Innovation out of Africa

Idrissi says he would like to see Africa build its own global tech giants. “I grew up seeing entrepreneurial models like Bill Gates or Steve Jobs or others that succeeded in the US and I was always wondering how we can make [similar] amazing achievements in Africa,” he recalls.

“The toughest situation we find ourselves in today is making Africans believe that we can do artificial intelligence and deep technology in Africa – and that we can do what is done in the US. Many people had doubts about whether we could do it or not… We face those questions. So yes, the toughest situation we face is when talking with public figures and they say something along the lines of this not being something that people like us can do in Morocco or Africa.”

Idrissi, who has also recently completed an MBA, says his happiest moment since launching the company was when potential clients started to contact ATLAN Space, without any marketing.

“This is simply because there is just no other specific technological solution that is tackling these problems,” he explains.

“It’s a top achievement for us when a potential customer we haven’t talked to, in a country we were not even targeting, wants to get in touch to adopt our solution.”

His message to other aspiring innovators is that they don’t need large sums of money to introduce new solutions.

“If you provide good value to customers, partners or investors, the money will come. Something I was hearing a lot when we first started this project was that this is a million-dollar project and we will not be able to succeed because we need a lot of money… This is a common idea that has prevented a lot of people from entering the entrepreneurial space,” he adds.

“But for me it’s really all about your idea and your ability to be agile, pivot and adapt to what the market, customers, investors and partners are saying.”