With the launch of Safaricom and Equity Bank’s M-Kesho product, mobile banking in Kenya has taken another giant leap forward. Dinfin Mulupi speaks to David Ferrand, country director of Financial Sector Deepening (FSD ) Kenya, about the importance of mobile banking. 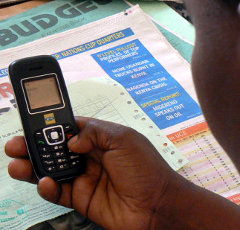 It is expected that banks which do not offer their retail customers access to a mobile payment system could find themselves at a competitive disadvantage.

How important is mobile banking with regards to reaching Kenya’s unbanked population, especially in the rural areas?

We think that it could be enormously important. The M-Pesa product (Safaricom’s mobile money transfer service) has already reached more people than any other financial service available in the country. In a survey undertaken last year over 95% of users rated this mobile-based payments service as quicker, easier, safer, more convenient and cheaper than the alternatives available at the time.

I think for those banks looking to operate in the retail mass-market it is likely to become increasingly important. There are two important elements to a product like M-Kesho – (i) access to many thousands of outlets through which it is possible to either deposit or withdraw cash and (ii) the ability to transfer money at any time to someone else on the system using your phone.

The first I suspect will drive expansion of bank usage. A non-mobile solution using bank agents and debit cards could readily compete with it. Furthermore it is perhaps less significant for the generally wealthier urban populations who are already close to branches or ATMs and shop in places that accept debit cards. However, with such large numbers of people on a mobile-based system, we can expect that the ability to transfer money electronically through a mobile phone is going to become increasingly important to a much wider range of users. A bank which does not offer its retail customers access to a system with such a major convenience factor for effecting small value payments could find itself at a competitive disadvantage.

Will products such as M-Kesho increase the penetration of banking services in rural Kenya?

I would be surprised if we do not see an increase in rural financial inclusion as a result. However, we do not yet know how the market will see the product. It is possible to store limited amounts of money on M-Pesa already. We will have to see how currently unbanked M-Pesa users are attracted by the idea of keeping their money in a full bank rather than a money transfer system. My guess is that this could be quite a significant pull factor – combined with the potential to earn a little interest and perhaps in time access credit. If just a quarter of unbanked M-Pesa users also adopted M-Kesho then we would see formal financial inclusion rise by around 8% from the current 22.6% (FinAccess 2009 data) to over 30% of the adult population.

According to experts the reason mobile banking has not picked up faster in western countries as compared to emerging markets in Africa is due to security. Will the fast growth of mobile banking in Kenya become its undoing in future?

I would tend to disagree with the premise here. I think the reason that mobile banking has not picked up in the richer economies is that the mobile banking proposition is simply less compelling to users there. People have more options. These countries are far more urbanised meaning people are likely on average to be closer to ATMs and bank branches. Higher wealth levels mean that more people can afford to operate bank accounts and therefore this infrastructure is much more extensive.

A country like the US has around 70 ATMs per 100,000 people while Kenya has fewer than 4. Debit cards are very widely used both by consumers and merchants providing an existing convenient and simple payment mechanism. Large percentages of the populations of rich countries also have access to the internet and we have seen exponential growth in online banking.

I do not think any one thing necessarily translates to economic growth. Furthermore, I think we need to wait to see the evidence before claiming too much. There are a number of studies on-going which I think will help to answer this question. However, there are strong grounds for optimism. A more efficient payment system alone can translate into significant cost savings across the economy, improving national productivity.

While cash has many advantages as a payment mechanism, it is quite expensive. There are plenty of anecdotes which show how much time and money people have saved through using mobile products. Mobile banking can be especially helpful for smaller businesses and farmers. Better communications combined with mobile banking offers the ability to buy goods and services remotely which could revolutionise trade. The result could be to join up markets in a way we have not seen before, helping to mainstream producers who are currently marginalised.