“Smartphone; in three to four years’ time everybody is going to have one. You take a look in Africa they’re sub US$100, they’re at $60-$70… It’s amazing what’s coming through.” This is according to André de Wet, managing director of online shopping and price comparison directory, PriceCheck, who spoke at last month’s AfricaCom conference in Cape Town. 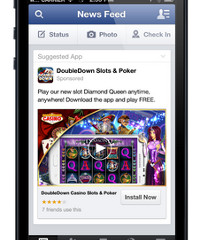 The very nature of mobile phones – the fact that they are almost always carried on users, always switched on, have built in functions such as cameras and allow sharing on social media platforms – makes them one of the most powerful forms of media, according to De Wet.

However, the most influential aspect of the mobile phone, explained De Wet, is that it gives people the power of decision at the point of inspiration. For example, if users see something they want to learn more about, they can search it online on their phone instantly. If users are enjoying a meal at a restaurant, they can share an image of their meal on social media. If consumers want to listen to a song, they can buy it instantly on their mobile phone.

This, and the fact that online usage is being propelled forward by mobile phones, make mobile phones an attractive platform for advertisers in Africa. However, De Wet explained that mobile advertising is not on par with other forms of media advertising yet.

One of the reasons for this, according to De Wet, is that advertisers have been slow to adapt specific solutions to the new technology. They are still using old technologies, such as webpage banner adverts to advertise on websites browsed on mobiles.

PriceCheck has recently introduced a mobile product search app, which also features a barcode scanner for in-store searches and price comparisons. De Wet, who is expanding PriceCheck across southern Africa, said when they decided to introduce the app, they did some research that revealed a few interesting statistics.

Apps are the banner ads of the future

According to De Wet, mobile apps are the banner ads of the future.

“There is no URL to remember, there is no website name to remember. All I need is a little square picture [on my phone] that will give me the solution.”

Online companies, such as TripAdvisor, have introduced mobile apps that are more personalised and easier to access for consumers than website services, according to De Wet.

“The in-product flow advertising is a very interesting one – it’s personalised and it works,” he said, adding that he thinks it works better than web advertising and will benefit small niche products and advertisers as well. “Facebook has picked it up and is running away with it [as a] result, and we have seen the result of that as well. It’s very powerful.”

He said location-based mobile ads also have a strong potential for companies and brands, and PriceCheck has seen the benefit of this. “Target mobile advertising has a higher CPA (cost per action) because the interaction with people on those mobile ads is completely different than it is on the web,” he continued.

“So yes, mobile ads are just getting started but if you look at apps, that will change everything.”