Guinea’s minister of mining, Mahmoud Thiam, last month told Anglo-Australian miner, Rio Tinto, that it must respect its obligations in Guinea or risk having its mining licence withdrawn. 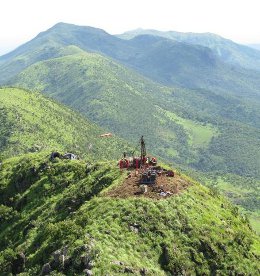 Rio Tinto carrying out exploration activities at the Simandou project.

The dispute reportedly centres on the miner’s failure to acknowledge an earlier decision to remove part of the project from Rio’s control.

According to a separate report, Guinea also informed Rio that it plans to acquire 20% of blocks 3 and 4 of the Simandou concession.

The Mining Convention signed by the two parties in 2002 gave the Guinean government the option to acquire a 20% equity stake in the project.

In 2008 the Guinean government stripped Rio of Simandou blocks 1 and 2 and awarded it to BSG Resources, owned by Israeli billionaire Beny Steinmetz. Rio retains the rights to blocks three and four.

According to the Wall Street Journal, the Guinean government said in early 2008 that Rio is moving too slowly on the project. The company has been conducting exploration work at Simandou since 1997.

In March 2010, Rio and Chinese metals group, Chinalco, signed a non-binding memorandum of understanding (MoU) to establish a joint venture covering the development and operation of the Simandou iron ore project. The scope of the proposed joint venture covers rail and port infrastructure as well as the mine itself. Rio and Chinalco’s effective interests in the Simandou joint venture will be 50.35% and 44.65% respectively. The remaining 5% stake is held by the International Finance Corporation.

The joint venture established by Vale and BSG will implement the Zogota project and conduct a feasibility study for blocks 1 and 2 with the creation of a logistics corridor for shipment through Liberia. The company said that in order to be granted the right to ship through Liberia, the joint venture is committed to renovate 660 kilometres of the Trans-Guinea railway for passenger transportation and light commercial use. Vale will be responsible for management control and marketing of the joint venture with the exclusivity for the off-take for all iron ore produced.

On 1 June, Rio and Chinalco separately said that they were still committed to the Simandou iron ore project.

“We’re still working on the details on developing Simandou under the joint venture,” said Lu Youqing, vice president of Chinalco.

A statement issued by Rio on 23 June reads: “Rio Tinto confirms we have received the letter and will be responding to the government in due course. We have always maintained our firm rights to the entire mining concession that was granted based on the 2003 Mining Convention between Rio Tinto and the government of Guinea.

“We have invested over $600 million in Simandou and in Guinea. Pre-feasibility studies are complete and Rio Tinto is keen to move the development forward quickly. The proposed joint venture with Chinalco and partnership with the IFC makes us an extremely strong development team.”

Guinea had its first round of elections on 27 June, with the top two presidential candidates to face one another in a run-off vote expected later this month. Guinea has not had a democratic transfer of power since it gained independence from France in 1958. It has been reported that a new government will review some of the multibillion-dollar deals with mining companies.

1996 The Guinean minister of mines, geology and the environment met with Rio in London. They noted that the Simandou area in the south-eastern part of the country had potential iron ore resources that were not being actively explored and encouraged Rio to send an exploration team to Guinea.

29 February 1997 Rio is granted four exploration licences for iron ore at Simandou, covering an area of 1,488 km2. For the initial three-year exploration period, a budget of $5.3 million is agreed with the government.

30 May 2000 Simandou exploration licences are renewed pursuant to the Mining Code, but with a 50% reduction in area to 738 km2.

26 November 2002 The Mining Convention is signed by the government and Rio. It includes:

3 February 2003 The Mining Convention is ratified by the National Assembly and is signed into law by president Lansana Conté.

25 February 2003 Upon publication in the Official Journal, the Mining Convention takes effect as a law of Guinea and promises the Mining Concession will be issued within 90 days.

30 March 2006 Rio’s Mining Concession is granted by presidential decree in accordance with the Mining Convention and the laws of Guinea.

12 May 2006 The minister of mines, Dr Ahmed Tidjane Souaré, agrees to a revised project timetable (feasibility report at the end of 2008 and commencement of production at the end of 2013) to reflect the delays in granting the Mining Concession and agreeing on the transport route.

20 July 2007 The minister of mines agrees to proceed with evaluation of the southern rail route.

6 June 2008 The general secretary of the president’s department, Sam Mamady Soumah, sends a letter to Rio raising a series of grievances regarding Rio’s Mining Concession.

11 June 2008 Rio responds to Mr Soumah with a detailed letter addressing the concerns he raised.

1 August 2008 Rio receives a copy of a correspondence from the presidency purporting to rescind the Simandou mining concession. Rio remains confident that its arrangements are in all respects in conformity with Guinean laws and that it has complied with its obligations and is currently in discussion with relevant ministers with a view to resolving any issues.

December 2008 Rio ordered by the government to hand over the northern half of the Simandou deposit to BSG Resources Ltd.

March 2010 Rio and Chinalco signed a non-binding MoU to establish a joint venture covering the development and operation of the Simandou iron ore project.