Former First National Bank (FNB) CEO Michael Jordaan is one of South Africa’s most celebrated business leaders. He became CEO of the bank at the young age of 36, and is credited with leading FNB to be named the world’s most innovative bank in the 2012 BAI-Finacle Global Banking Innovation Awards. FNB was the first South African bank to launch an app. 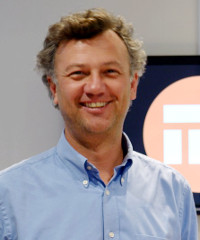 Last year Jordaan stepped down as CEO and traded the corporate life to start his own venture capital firm, MonteGray Capital, which invests in disruptive business models enabled by technology. Jordaan is also chairman of mobile messaging company Mxit. A wine enthusiast, Jordaan is owner of the Bartinney wine farm outside Stellenbosch in South Africa’s Western Cape Province.

In a relaxed closing address at yesterday’s SAVCA Private Equity in Southern Africa conference, where delegates were each given a glass of wine, Jordaan spoke about the similarities between winemaking and venture capital. Here are the highlights of the talk.

Jordaan says startup companies are like wine when it is still at the grape stage. “There is no way of really telling whether those grapes will turn out into a good wine or end up as vinegar, because vinegar is also made from great looking grapes.”

2. No shortage of new business ideas

Unlike global wine supply which goes through periods of over or undersupply, Jordaan says there are always enough new entrepreneurial ideas. Since its launch, MonteGray has been approached by numerous entrepreneurs seeking investment for their ideas. “The supply of venture capital ideas and dreams will never be in short supply.”

Similarly, he notes, it is the patient investors who do well in venture capital.

According to Jordaan, the more the vines “suffer” the better grapes they deliver. Vines need to be pruned “hard” and when they are deprived of water the roots go deeper into the ground where there are “more interesting chemicals”. This in turn ensures that the flavours of the grapes are more concentrated.

He says it is also good for startups to have constraints. “Businesses that are spoilt with too much captial make the wrong decisions… Constraints are the most wonderful things in business, because constraints allow you to be innovative and come up with different solutions.”

5. There is room for a little sentimentality

Jordaan says that in winemaking it is good to have a passion for the industry and to “have a little bit of wine in your blood”.

While discipline and a focus on the numbers are important in business, it is important for entrepreneurs to have a passion for what they are doing. “Nothing infuses me as much about business as somebody who has a deep knowledge of [their] industry and who is passionate about it… There is room for a little bit of sentimentality in business, and it is knowing where to draw the line,” says Jordaan.

6. It is about a few key people

Jordaan says that while the winemakers have become the rock stars of the industry, it is actually the viticulturists who look after the vines who should get the credit. “Wines are not made by the winemaker, they are made in the field.”

Successful businesses are built by a few key people. “In all the deals we’ve seen so far, we do all the normal… the due diligence, and free cash flow analysis, the contracts, the shareholders agreements, and so on, [but] I absolutely believe that while those things are maybe good processes to go through, ultimately you look a jockey in the eye… and you decide whether this is the right individual with which to go the journey.”

Jordaan says that wine tastes a little bit better if you know a story about the wine farm or how it was made.

Similarly they also work in attracting venture capital. “The best deals that I’ve seen is just an individual who can come in there and tell a compelling story,” says Jordaan, adding that it is not about the figures and having a great presentation but about an entrepreneur explaining how he identified a problem and set out solving it.

For consumers it doesn’t matter whether an app was developed in Silicon Valley or India, it remains just a finger tip away.

In the same way wine has also become a global industry. “You can no longer count on [South Africans] just drinking South African wines because of loyalty; you have an incredible choice in the world.”

The good thing about this is that investors also have the opportunity to venture into the rest of the world.

9. No formula to success

“There may be standard methods to make wine, but in the end it is a science plus an art,” says Jordaan. Likewise “there is not a simple formula for creating a successful business.”