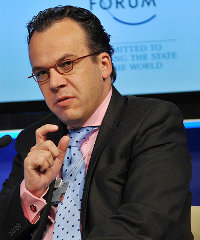 I have always been quite a fitness fanatic and for my very first job I worked for a company called Run For Life. It’s now countrywide. It started in Johannesburg and my job was to facilitate, help, advise, and accompany people on their runs three times a week. I was 16 years old and it was a part time job of course.

A number of people: those who I have met and those who I have not met. One which immediately comes to mind is a phenomenal individual who I’ve gained enormous amounts of insights from – whether he realises it or not – is a chap called Ronnie Chan. He is the chairman of Hang Lung Group, a listed property development company in Hong Kong. Ronnie was the youngest, as well as the first Asian ever, to chair the World Economic Forum Summit. I see Ronnie once or twice a year in Hong Kong when I’m passing through and I never seize to be amazed by his practical insights and his very robust intellect.

Nothing keeps me awake at night. I don’t have a job; I’ve been able to marry my passion and profession. Very few people are able to achieve that, and I’ve been the architect of my entire career from day one. So I’m incredibly happy with what I do and honestly speaking I’ve never lost a night of sleep, or even an hour of sleep, since I’ve started my career.

Look, my life has been on fast-forward ever since my university career. I finished my PhD at 25; I believe I was the youngest in South Africa at the time. So I think its firstly extreme focus. Secondly, whatever you do, do it with extreme passion and do it to the end. Linked to that – I don’t know a great career, a great company, or a great country that was built on 40 hours a week. So clearly a hard work effort is a given, and perhaps lastly is to be able to – perhaps not consciously at times – build a network of individuals and friends that have mutual interests, that are mutually beneficial and, not least, based on trust.

You know I was on 89 flights last year and I spent a lot of my time and my life in Asia. If you ask me my country, it seems I’m increasingly Chinese or Singaporean. I was in Beijing 14 times last year. But looking at South Africa, I look at it through various lenses. I think firstly, from a commercial perspective, there is probably only one other country in the world that I can think of that is our size that has been able to create the number of globally competitive multinational corporations as South Africa. That other country is South Korea. There are no others. So that is an incredible achievement and one that we should all be proud of. Secondly, what makes me proud of South Africa is the incredible collective stories that we hear in this country throughout its history. Stories, that I’m afraid aren’t told anywhere near often enough, of individuals who have done phenomenal things, be it in the commercial realm, exploration realm, business realm, political realm, and just as a footnote, it frustrates me at no end. Why aren’t we a New Zealand or even a Nigeria or India and creating a phenomenal movie industry in South Africa using the stories we have? These are totally neglected.

I think South Africans not seeing the bigger picture. We need to forge a nation and we are not doing enough to forge a nation state… I think that one of the negatives of South Africa is that we still need to see similar, true values – political, national values – being created and instilled in people for us to truly progress as a nation. Without that, we are treading water.

I’ve noticed that my career and the things I do have been in four-and-a-half, five year spurts and I have just come to the end of a five year stint and Frontier Advisory is exactly five years old. It’s been phenomenal. I would argue that we have been the thought leaders, practitioners even, when it comes to advising, servicing South African capital into emerging market economies, particularly Asia. What is next? I have been very involved in the World Economic Forum for quite a number of years, since 2006/7. So that’s of course appealing. I think for me the next step is to maybe increasingly globalise what we do and do that through maybe a multinational corporation (where the reach and resources are significantly greater) that allows us to better implement our vision.

I went through a period a few years ago where balance was simply impossible, so balance is highly overrated. Now days what I do to relax is maybe three things. I read enormous amounts. Secondly I play football with my two children – my seven and four year old – at least twice a week when I’m in the country. And thirdly I used to cycle in university back in the day, so I do a lot of cycling, despite the extreme, aggressive nature of road users in this country (I think everyone will agree with that). As a cyclist that makes it somewhat difficult at times.

Be passionate about what you do and work hard. Nobody owes you anything – understand that. Build your network of friends and trusted advisors. You really should get a really qualified, interested mentor to assist you on this road. Globalise as much as you can – i.e. learn Mandarin, learn French, learn Arabic, travel the world – and above all stick to your dreams.

Well, how can Africa be the next Asia? I think through a more prudent, better political leadership that creates an enabling environment for private capital and opportunities for people to grow and flourish. When the continent realises that its resources in the ground have practically no value, then we will progress. The realisation must be that the only resource that counts is the people and the human capital one can develop through one’s people. When that realisation sets in, and this is not going to happen anytime soon, can Africa truly progress and develop.