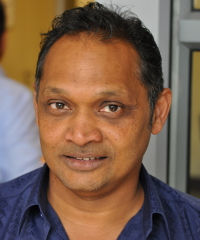 “We will look back at this time as the golden age for Africa; the time to have started businesses. The time to have been born and to be young,” says Herman Singh, Vodacom’s head of m-commerce.

My first job was as a lift mechanic, so when lifts broke down I had to go rescue people. It was a vacation job I had during university. But as a child I worked in my grandfather’s coffee shop. So I got into trade very early in my life.

Certainly some of my bosses. If you take out wives and kids and teachers, Dr Alewyn Burger (my boss for 10 years at Standard Bank) shaped my thinking a lot and set examples about how to lead and create the right integrity in an environment, build the right values systems, and get the best out of people who are using them. So I have been very blessed with having some super leaders in my life.

I run many businesses for Vodacom, and what keeps me up is whether the systems are up, and if there are any integrity issues or any way that we are compromising the interest of the customer or the interest of Vodacom. Could the system go down? Could there be a security breach? That’s what is keeping me awake at night. Not that there is any reason that it should, because we have worked on contingencies, we have good teams and good back-up plans. But there is always a niggling fear that there is something you don’t know that you don’t know. We live in a very complex world where it’s very easy for there to be something you don’t know that you don’t know. Who knew that you could lose an aeroplane? I didn’t think that was possible, and I didn’t know that I didn’t know.

It’s a lot about hard work, although that sounds like a very trite answer. But it is about perseverance and to a large extent two things: knowing yourself and your purpose, and aligning your life to that purpose. Because if your life is not aligned to your purpose, everything is work. But when it is aligned to your purpose, nothing is work. Everything is joy, and so called hard work is actually hard fun. Perseverance really then becomes about playing hard, not working hard.

I think the challenge most people have in life is we often make career decisions when very young. So when you are 15 you have to choose what to study, and then you study in high school and end up in a particular career direction in university. Then over four say years you graduate and get a job in the field you’ve studied, and before you know it you are 40 and have had 20 years in a particular direction. And it turns out you actually never liked it. Some of the saddest things I’ve seen are doctors who do not want to be doctors, or lawyers who do not want to be lawyers.

So my success, I guess, is that I was able to spend a lot of time reflecting and figuring out who I was, what works for me, what my purpose is, and aligning my life to that. For example I am a very innovative person, so I shouldn’t get a job where all I do is run a factory. But I started my life working like I was running a factory and I realised I actually didn’t like it. And the trick is to be brave enough to make those moves.

5. What’s the best thing about your country, South Africa?

I love South Africa. I’m a very passionate South African. I’m an avid cyclist so 300 sunny days a year is awesome and the fact that we have two of the biggest cycling races in the world here is great. So I love that and the fact we are a very outdoorsy country.

I also love the fact that South Africa is a lot like the Wild West. People got shot in the Wild West, and people get shot here. I’ve been shot… But this is not Boston. This is what California used to be in the 1800s. And the beauty of living in California in the 1800s is there are no barriers to creativity, there are no limits to the power of imagination and what you can’t do. And I do believe that living here is actually amazing because it is so easy to come up with new ideas around new businesses and actually get things done. I do feel that as South Africans we tend to fixate on what is broken, and my advice would be to focus on the issues as opportunities. And there are massive opportunities. Where there is sand in the gear box, there will be a garage that is going to take it out.

We have got a lot of sand in the gear box.

I don’t believe that one should blame governments too much. Obviously we have things like crime, HIV/Aids, poverty, imbalance of wealth and the inability to deliver social services… and they bother and concern me too. But for me the bigger issue is that in most countries governments stay out of things. And that’s okay because in most countries governments are ineffective. Actually, the challenge in South Africa is government trying too hard to be effective by trying to fix what is already right rather than opening up the economy to let those of us who know how to do it, do it. If we can have less government, rather than more, we would actually be a more successful country.

Well I love what I’m doing. I will always be in an innovation and tech space and I enjoy the convergence of business and technology. Right now Vodacom is a stunning place to be.

I joined a bank when the dot-com era came because banks were about to get blown up and so we developed amazing strategies for banks. Now I’ve joined a telco (two years ago) as the edge came off the voice, data and text business, and there is a need to build new businesses.

So wherever I think those skills resonate, that’s where I’m hoping to be. I will always be in an area where a business needs fundamental and radical change, and processes and models have to be innovated rapidly using technology. That’s what I am going to be doing.

I love cycling. I love spending time with my family, wife and kids… I love travelling a lot, and I love grand prix racing. But really cycling is my passion. So after my wife and kids, my love is cycling.

9. Your message to Africa’s young aspiring business people and entrepreneurs?

I would tell them that I’m so envious. I wish I was their age and able to do it all again. Africa is the new Asia. It is literally the next big thing. We have got US$1,6 trillion in GDP and a billion people, growing at 6% – that’s India, if Africa was a single country.

We are living in a fantastic time where technology is allowing things to happen that could never have happened when I was starting my career. So I think conditions are better now than ever for a young person to get into business, start a business and build amazing things and a career for themselves – as well as actually fulfil their purpose. Maybe we will look back at this time as the golden age for Africa; the time to have started businesses. The time to have been born and to be young.

Other than my advice that young people should know themselves and figure out their purpose, they should look, listen and learn. I call them the three ‘Ls’. It’s really important to not come up with preconceived ideas and to become committed to a journey that would take you nowhere. It’s important to become flexible and agile, meaning when you learn things that indicate the path you are on could be different, be agile enough to move. Be flexible enough to change.

And maintain integrity and trust. Trust today is actually more valuable than money because you can’t buy trust. So the future currency in the world is trust. The ability to build trust in yourself as a brand and build trust in your product and company, is probably the single most important skill successful individuals will need in the next 100 years.

Less government is my view. But I think, if I could give an Africa-wide recommendation, it is really to put personal interest below community and national interest. The challenge in Africa is that this often does not happen. What is corruption? It’s when I put my personal interests above the interests of my country and the community. It’s about me; it’s not about us. Africa is the place where ubuntu was invented, and ubuntu is about us. So my recommendation is that if we look at all the challenges we have from war to tribalism, factionalism to failed states, to the inability to mobilise government resources to deliver services, all of this fundamentally boils down to one thing, and that’s ego. There is actually an ego issue in Africa today… it’s our disease. If we could put the continent above personal and actually petty interests, that would be amazing.

Herman Singh heads Vodacom’s mobile commerce division and was responsible for the relaunch of M-Pesa in South Africa this year. The mobile money service, which has been extremely successful in Kenya and Tanzania, has been redesigned for the South African market after it previously failed to gain traction. Prior to joining Vodacom in April last year, Singh was the head of Standard Bank’s Beyond Payments division.