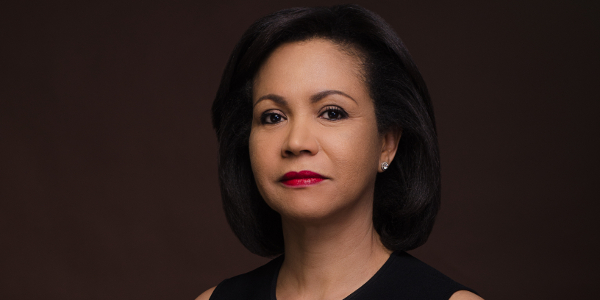 “When I look at other women in the marketplace, who are running like five, six, seven or even eight stores – and are educating their children and taking them from primary school to university – I can’t help but feel great admiration for their strength, courage, and resilience,” says Adenike Ogunlesi, founder of Ruff ‘n’ Tumble in Nigeria.

In a biscuit factory. I was 14 but determined to earn some extra pocket money. So I said to my mother I was going to go look for work, and a family friend of ours owned this huge biscuit factory – and I went there to work.

2. What parts of our job keep you awake at night?

The cost of finance and the running costs of a business as you grow – those are the things that primarily keep me up at night. But I’ve got a great team and that means the burden is shared, even though the ultimate responsibility lies with me … So I am not awake as much as I used to be..

3. Who has had the biggest impact on your career, and why?

My mother. She was Scottish by birth and came to Nigeria and lived there for 50 years – and discovered a fabric called Adire and decided to build a business out of making clothes from it. So she has been the most impactful person in my life in terms of her courage, resilience, work ethics, standards, and just her creativity to build something from nothing. She has [passed on] now but was a great pillar of strength and very supportive.

There have also been other people who have been influential in my life. When I look at other women in the market place, who are running like five, six, seven or even eight stores – and are educating their children and taking them from primary school to university – I can’t help but feel great admiration for their strength, courage, and resilience. Those women have also been a great influence, even though I’m observing them from afar.

My husband has also been a great pillar of support and very encouraging. In our society men are not always supportive of their wives but I am truly blessed. He is exceptionally supportive as are my wonderful children and the great team that I have working with me– I don’t think I could do much without them now. They are quite amazing.

4. The best professional advice you have ever received?

5. And the top reasons you have been successful in business?

I think resilience would be at the top, flexibility would be the next, and then I have also been lucky to have worked with a group of people who have seen what I am trying to achieve, who have bought into the vision of the organisation, and are willing to give it their heart and soul. I can’t say that I have been successful just because of me. I think it has been because of the kind of people who I have surrounded myself with – both at work and outside of work. It is more about the choices and  kinds of people that I have surrounded myself with.

6. In your opinion, where is the best place to learn for leadership: business school or on the job?

Business school is great because it gives you the theory of how business should work. But I say life in itself is a university and teaches you in its own way and own time, along with the choices that you make as you go along. So I think the concepts of leadership coming out of university are fantastic, but it is bringing them to life and the actual practise of them that really makes a leader.

So for me it is more about translating the knowledge into action that makes a leader and the ability to impact on the lives of the people that you are working with, are interacting with. The ability to then take that knowledge and make a difference in their lives, and for them to then carry on with the business whether you are there or not – for me, that is leadership.

I love to dance. I joined what started out as a zumba class, but we sort of kinked it and made it a Nigerian zumba. We play a lot of Nigerian music. It is very upbeat, very fast – so it is working out and dancing at the same time. I look forward to that, but otherwise I don’t really like exercise. I just love to dance and as soon as I hear music I like. my feet start moving and my face breaks into a smile. So that’s how I relax. But I also love watching movies and travelling.

8. What time do you like to be at your desk?

Never later than 10am. I used to get to work no later than 8am, but my dance class now starts at 8am. As I matured I decided I would go into work a bit later and leave a bit later, rather than going in  earlier and missing the dance class. I had to find a balance because, after all, I am the boss, so I have the privilege to be able to go in two hours later and leave two hours later if I want to.

In the beginning I was getting to work at 7am and leaving at 8pm – juggling being a present wife and mother in the lives of my children and my husband… It has been the journey of a lifetime. I have learnt so much, changed so much, and grown as a person … I have had so much fun, but also had my moments where I cried buckets – that’s the honest truth.

Once you are able to connect people with a purpose and they find fulfilment in what they are doing, you’ve got their head, heart and hands. And for me this is not an easy thing to get all the time. Sometimes, as they say, you have to kiss many frogs before you get prince charming. But that’s why it’s important for me to find out where [potential employees’] passion lies. Once it is your passion, it is something that you like doing; and then everything else falls into place. You can face challenges and whatever comes you way, and will always find solutions. But if you are doing something you do not enjoy, then with the first challenge, you will give up and walk away.

10. What is your message to Africa’s young aspiring business people and entrepreneurs?

Find your authentic self – everybody else is taken. Find out who you are, what your purpose is, what you like doing, what you are passionate about – and then go after it with everything in your total being. Things will then fall in place. As they say, the Earth conspires when you are clear on the universe that you want – it will give you that universe, it will.

Adenike Ogunlesi is the founder and owner of the Nigerian children’s clothing manufacturer and retailer, Ruff ‘n’ Tumble. The company was started in 1996 out of the boot of her car in Lagos, and today it has 15 stores across five cities in the country and has another opening before the end of the year. There are further plans to open more than 25 additional stores between 2016 and 2018.