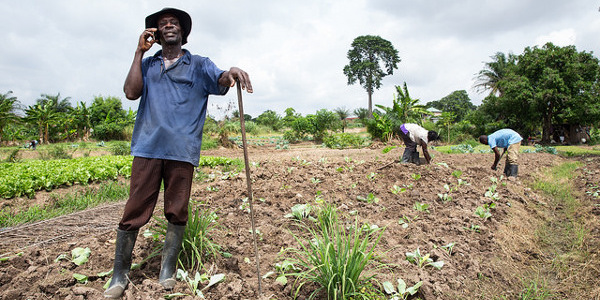 While Africa’s agricultural potential is significant, unlocking it requires practical, on-the-ground effort and innovation. Given the continent’s diversity, a winning strategy for any company must first prioritise a few countries and value chains in which to place most resources, including personnel, investment dollars, and partnerships. Companies can pick these areas by disaggregating the growth potential and the enabling conditions across countries, value chains, and farmer types and then effectively prioritising those areas based on the company’s own product or service offering and competitive advantage.

Choosing these few priorities well is particularly important, as we have found that it is difficult to replicate approaches across countries fully; therefore, the need for purpose-built strategies can quickly fragment resources if too many areas are pursued. We typically find that a handful of prioritised areas will provide most of the growth for any company on the continent.

Besides choosing priority areas, companies looking to invest in and expand their efforts in sub-Saharan African agriculture can follow seven lessons that touch on both supply and demand. These recommendations are most applicable to input players, but commodity traders and processors could adapt them for their use. For example, farmer engagement is still critical for traders and processors, but its importance is more in promoting quality and traceability in production rather than in creating demand for inputs.

Supply side: Innovate in route to market

Supply chains for agriculture in sub-Saharan Africa are fragmented. In analysing major agricultural-input chains in eight countries, we found that inputs changed hands at least three times before they reached the farmer, moving from national importers to regional distributors to “agro-dealers” (which are typically small, rural shops). Of nearly 1,000 agro-dealers surveyed, 68% purchased from local distributors, and only 23% purchased directly from manufacturers.

On average, this fragmented supply chain led to a 20% to 50% markup over import price across major agricultural inputs, with about one-third to one-half of that captured as margin by the distributors and retailers in the chain.

Given fragmented supply chains, companies have an opportunity to reduce costs and increase value by streamlining and expanding distribution. For input companies, this can mean gaining greater control of the distribution chain and holding more of the working-capital burden by maintaining ownership of inventory in rural aggregation points. In Tanzania, if fertiliser manufacturers were to invest in direct distribution to clusters of agro-dealers, that could yield a 10% to 15% cost reduction through savings on working capital and the decreased number of steps in the chain. Presuming this savings would be passed on to the farmer, this would improve the ROI for about 800,000 additional farmers, nearly twice the number of farmers estimated to be using fertiliser in the regions studied. Such a change could equate to more farmers buying fertiliser.

Improved distribution could also come through stronger partnerships with other input companies to share the costs of distribution and warehousing across the value chain, again relieving the burden on agro-dealers. The Last Mile Alliance in Tanzania, a partnership of Bayer, NMB Bank, Seed Co, Syngenta, and Yara, worked to establish agro-dealers in remote areas, using shipping containers as storage and building resources through training and demonstration plots.

Another approach could be incentivising the existing distribution chain differently. In interviews with distributors and agro-dealers, we found that about 60% of them receive incentives in the form of volume-based discounts. But a look at the experience in consumer-goods businesses suggests that moving incentives from volume-based discounts toward those based on cross-selling with other products or expanding into underpenetrated areas could change behaviour within the distribution chain to focus on expanding access and selling a more optimal product mix.

Some innovators are using digital solutions to provide streamlined and more reliable distribution for inputs and produce. For example, iProcure is a business-intelligence and data-driven stock-management company that uses data to support retailer fulfilment (with cost savings to current distributors). Another company, Twiga Foods, uses a mobile-based B2B platform to connect farmers directly to buyers of horticulture produce. It uses a network of collection points and delivery vehicles to distribute this produce efficiently.

Nominal interest rates in sub-Saharan African countries are commonly above 20% – among the highest in the world – making access to working capital for small agro-dealers challenging and limiting their ability to purchase sufficient volumes of inputs. Longer payment terms are a cheaper mode of finance; migrating dealers to longer terms based on payment history can facilitate growth. In some cases, partnerships can be developed to mitigate the risk of default. For example, AFAP Partnership provided a first-loss guarantee to fertiliser suppliers to extend payment terms to agro-dealers in Tanzania, contributing to an approximately 35% increase in fertiliser sales.

Agro-dealers play a critical role as the last mile in the chain, often due to their knowledge of local farmers and the trust they engender in the community. In a survey of nearly 1,000 agro-dealers across four countries, we found that 30% of them provide some level of agronomic advice to farmers; 73% extended credit to at least some farmers (with one-third providing credit to 10% to 50% of their farmers).

Improving service to agro-dealers is therefore a key lever for agriculture-input companies to explore – and they can learn from other institutions in the agriculture value chain that are doing this well. Several banks in Kenya support high-performing agro-dealers to improve their farmer-service levels. Equity Bank Kenya and KCB Bank Kenya identify high-performing agro-dealers to serve as agents that offer financial services to farmers in their networks. While the average agro-dealer in Kenya reaches 600 to 1,000 farmers, Equity Bank Kenya works with high-performing dealers that are connected to up to 10,000 farmers, offering them preferential loan terms and access to accelerator programmes with financial training and other incentives.

Demand side: Invest in farmer engagement through traditional and nontraditional methods

We found that most farmers in regions where companies had invested in demand-creation efforts were largely aware of the value of using improved inputs. For example, hybrid-seed-adoption rates in southern Tanzania – where effort had been made by private companies to build demand – were greater than 60%, versus a 20% average national hybridisation rate. We also learned that farmers were well aware of the qualities of different brands in these areas. Nine of ten farmers we interviewed in southern Tanzania were able to explain the merits of different brands across inputs. In Kenya, our agro-dealer survey found that 43% of farmers name a specific brand when they come to purchase inputs.

This suggests that farmer engagement is critical. Yet, given the fragmentation of the farmer base in most of sub-Saharan Africa, it can be a daunting task. Private-sector companies could benefit from four demand-side approaches.

Farmers are not all the same. As mentioned, the ROI for inputs can vary significantly within a country, depending on market access, agronomic conditions, and other dimensions. However, we have observed that poor data often mean that companies use anecdotal information to make decisions about which farmers to target for demand creation as well as where to deploy their sales forces. This often engenders an overreliance on local distributors or traders.

With relatively simple methods such as SMS-based surveys, field visits, and interviews, companies can typically assemble a practical farmer segmentation that allows for better targeting of demand-creation efforts. In East Africa, we found that understanding whether a maize farmer was a “monocropper” (growing only maize) or an “intercropper” (growing multiple crops) made a difference in the type of maize seed they purchased. Monocroppers tended to be more risk averse and preferred to plant lower-yielding, shorter-maturity seed varieties. In a West African country, the relative age of a farmer’s cocoa trees was also a major factor in buying behaviour. Yield reductions for cocoa trees older than 20 years offered farmers limited incentive to invest in inputs, versus that with trees between eight to 15 years of age. Younger trees were predominant in certain regions, suggesting that companies could better target demand-creation efforts in those places.

5. Tailor to local preferences and needs

Understanding local buying behaviour, constraints, and preferences through segmentation can also allow companies to target farmers better. We have seen the emergence of smaller pack sizes for inputs to address more modest land sizes and to make it more affordable for farmers who cannot purchase larger packs. In East Africa, Yara has introduced 50- , 25- , and 10-kilogramme bags for fertiliser. In Kenya, most maize-seed companies offer 25-, 10-, and two-kilogram bags. In Nigeria, we also saw crop-protection sachets as small as ten millilitres.

Branding that resonates can also make a difference. Seed Co, which calls itself “The African Seed Company” and has a large-scale presence across East Africa, uses African wildlife in its promotional materials to demarcate its different seed varieties.

Companies and governments alike should address the adulteration common in many markets, such as those where fertiliser mixed with sand, or refilling of empty bottles of branded crop protection with diluted product, has been known to happen. Stricter regulation and monitoring plays a critical role here, but companies are also adopting innovations to support the effort. For example, seeds sold by Pannar in Ghana are dyed red to show they are certified. One fertiliser company in West Africa put a clear plastic window on its bags so that farmers could see inside and know that the bag was unadulterated.

Companies should also consider targeted product innovations that meet local agronomic needs or consumer preferences. These include seed varieties that address local taste preferences (for example, preferences for parboiled versus fragrant rice in Nigeria) and tailored fertiliser blends. Because of long development or testing cycles, these innovations can be done in partnership. The Water Efficient Maize for Africa (WEMA) project is an example of one such partnership.

Once basic segmentation is in place, companies may consider evolving into more analytical and micromarket-segmentation approaches as they gather better data, have enough products in their pipelines, and have an efficient supply chain to differentiate which farmers and agro-dealers are demanding certain products.

6. Invest in a sales-force and promoter network, potentially through nontraditional partnerships

Capturing farmer demand is very much a ground game. One successful seed company in East Africa deployed networks of part-time promoters during planting season, model farmers with demonstration plots, promotions at market days, and simple branded giveaways, such as T-shirts. These efforts are often relatively low cost, using village-based promoters or lead farmers for promotions. They do, however, require strong operational management to ensure effective deployment.

Partnerships with development partners and nongovernmental organisations can help scale up demand-creation efforts, reducing the burden of managing a large field force. The partnership of the government of Ethiopia, DuPont Pioneer, and the US Agency for International Development in the Advanced Maize Seed Adoption Program (AMSAP) significantly increased maize-hybridisation rates in that country. Africa’s growing agritech industry also provides scope for partnerships. For example, Syngenta has partnered with Arifu, which provides an SMS-based learning platform to farmers in Kenya and Tanzania, to provide agronomic services to smallholder farmers.

7. to address the farmer working-capital challenge

Given the fragmentation and challenges assessing creditworthiness, access to finance for farmers to purchase inputs (or hold on to outputs to sell when prices are higher) remains a challenge.

Organisations have innovated in this area. For example, One Acre Fund has provided financial products tailored to local farmer cash flows and behaviours to about 615,000 farmers. These are complemented by training and a field force working closely with farmers to ensure a 98% repayment rate.

Rising mobile-phone penetration and improvements in satellite and other forms of data communication also present another solution to this challenge. M-Shwari and Tala in Kenya use mobile-money transactions; voice, SMS, and data usage; and social connections to evaluate household creditworthiness and loan size. Organisations such as Apollo Agriculture and FarmDrive use remote sensing and satellite data to incorporate agronomic factors into their credit-scoring systems.

Private companies can consider partnerships with such organisations, which are innovating on the ground and can help address the working-capital challenge.

This article is an excerpt from a recent McKinsey report, titled Winning in Africa’s agricultural market.