South African Ashley Uys is the young scientist and entrepreneur behind three companies that manufacture, market and distribute low-cost medical and drug abuse diagnostic test kits. Before the age of 30 he developed a malaria testing kit – which he sells for R4 (US$0.37) – that gives an early diagnosis of the strain of malaria and indicates how well medication is working. 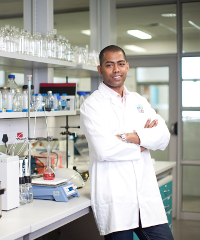 “I did a market analysis and saw there was a gap in the market for diagnostic tests for drugs of abuse,” Uys told How we made it in Africa. Methamphetamine abuse is a particularly big problem in Cape Town.

In 2006, at age 24, Uys started Real World Diagnostics, a distributor of rapid medical and drug diagnostic kits. He got a contract with Alpha Pharm pharmacies and imported and supplied products such as drug and pregnancy tests to their branches across South Africa.

But after developing a solid customer base, he realised there was a market for local manufacturing of these products. In 2010 he set up Medical Diagnostech. The company has a manufacturing facility in Brackenfell, Cape Town, and today produces diagnostic test kits for HIV, malaria, pregnancy, fertility and a range of drugs. These products are sold to pharmacies, drug rehabilitation clinics and other medical and distribution centres for as little as R4.

Uys’s latest company, OculusID, was founded last year and develops biometric solutions for impairment detection. The company has developed applications for cameras and mobile phones that analyse the pupil of the eye to determine whether someone is impaired due to substance abuse. One of their products, OculusPro, is a camera device for employee access control systems. It integrates facial recognition and detects visual impairment to improve workplace safety.

“So basically these cameras will come available after September. We are targeting the mining sector whereby [employees] clock in at work using this access control camera but then it also checks your eyes for impairment. So that is what we are currently busy with.”

His medical diagnostic test kits are also currently distributed internationally to markets such as Nigeria, Côte d’Ivoire, Pakistan and Papua New Guinea. Uys is also in discussions with a company in Nigeria about setting up another manufacturing facility in the West African country.

“It makes sense to have a manufacturing facility in Central Africa seeing that most of the malaria is in that area. So from a distribution perspective, to get products into all the countries needing it, we will be cutting costs in terms of logistics if we do that. So I am in discussions at the moment with setting up a facility in Nigeria.”

Uys has been the recipient of a number of awards and accolades. In 2012 he won first prize and R1m ($94,000) from the South African Breweries (SAB) Foundation at its annual Social Innovation Awards and last year he was named one of Africa’s best young entrepreneurs by Forbes.

But how did a biotechnologist become a leading entrepreneur? Uys said it wasn’t easy.

“You know being a scientist; we tend to think very factual. You can ask a scientist about a gap in the market and the value chain, but if he didn’t actually have a bit of formal business training, well, in my case I had tunnel vision because of my science [background]. To combine [business and science] was a bit challenging.”

Uys said he is grateful that he had the chance to complete a number of business courses before starting his own companies. This gave him a good business sense when it came to making strategic decisions, and he was able to start and expand Real World Diagnostics without relying on massive loans.

One simple strategy he adopted was to negotiate favourable credit and payment terms with his suppliers and clients. For example, he negotiated with Alpha Pharm to pay him for his products within 30 days of delivery, and he negotiated with the suppliers of his products that he would pay them within 60 days. This way he could easily manage his cash flow and build up profits, which he invested in his next business ventures.

However, he has learnt some valuable business lessons the hard way, such as the importance of taking all contracts to a lawyer before signing them. At the age of 25, Uys was taken to the High Court over a misinterpretation in a contract he signed without legal advice.

“I am so happy that it happened at a young age where I didn’t have much to lose. But it also opened my eyes about how contracts should be done… and how important it is to take all your contracts to a lawyer.”

However, there are challenges he is facing at the moment, such as competing with the large companies that are already well established in the market.

“Being in the biotechnology industry, usually once you reach a certain size, the big pharmaceutical companies come and, if you have become a threat, they buy you out. So in terms of expanding, to be able to play with the big boys, it’s a massive investment. We are a profitable business but in order for us to take on a company like Pfizer or Merck, you need resources to do that… We don’t have the infrastructure like Pfizer, and that is one of the biggest challenges. In order to build that infrastructure, we need a massive investment. So it’s like a catch-22. You are growing fast but you need investment to grow faster.”

His goal for the next 10 years is to list his company on the Johannesburg Stock Exchange, and establish a research and development facility, which is a passion of his. He advises other entrepreneurs to enter into an industry they are passionate about, and then look for gaps within the market.

“So I think it starts with passion and then it comes down to understanding your market. Do proper market research, understand that market inside out, know all the competitors in that market and see if it’s viable for you to enter that market.”