“I want to have a personal valuation of US$1bn by the time I am 40,” says Dennis Makori. The Kenyan entrepreneur has always harboured big dreams. 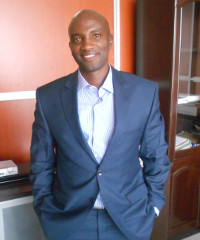 Makori started his first business from his hostel room while studying towards a degree in electrical and communication engineering. A self-taught computer programmer, Makori is the founder and group CEO of Onfon Media, a value added telecommunications services provider.

“While in my second year in university [1999], we did a course called introduction to computers and that was the first time I saw a computer. I developed a keen interest in computing,” says Makori. “I delved into computer programming and by the time I was finishing college I was more of a programmer than an electrical engineer.”

Makori (33) started his first business, a software development company, with two classmates at their college hostel. That company was not successful, but it led on to Onfon Media.

“We laid the foundation stone in our hostel room. It was more of a dream than a reality. We had no money or experience on how businesses work, but we had the drive and the motivation.”

Founded in 2007, Onfon Media has grown in tandem with Kenya’s mobile phone penetration and increasing consumption of mobile-related services.

One of the opportunities the company has captured is linking mobile operators with local TV and radio stations. During prime time news for instance, Kenyan TV stations ask viewers to send in comments on a particular issue via a given shortcode. Onfon Media, which controls 45 shortcodes, handles the integration and makes money through a revenue sharing model.

“[Advertising] is going mobile. When you get an SMS on your phone, you are bound to read that text. When you get a pop-up on your app, you are going to look at it. Your success rate on mobile advertisements is quite high because it is personalised,” Makori says.

Makori told How we made it in Africa that getting clients to appreciate the services Onfon Media offers was difficult at the onset, but this has changed over the years.

“We have had a very good run because in just six years of operation the company is now valued to be worth $50m by our auditors. We are just starting to scratch the surface. We are casting our sights much higher.”

Onfon Media has 65 employees with operations in Kenya, Tanzania, Uganda, the Democratic Republic of Congo (DRC) and Ghana.

“[The DRC] has enormous opportunities but people perceive it to be very risky. If you get a way of working around the risks, then it becomes a very niche market. We use local staff because people in DRC have to live and survive the circumstances they find themselves in. If you give them gainful employment, then you have a workaround.”

Onfon Media plans to expand to five other African countries including Nigeria and Zambia where feasibility studies have already been conducted.

“Nigeria is a very big market [by population]. Even if you have a small uptake you manage to do a lot more than you would in a setup where you have fewer people.”

According to Makori, Onfon Media has been successful because of the firm’s constant innovation and its approach to management.

“We know that innovation is the lifeblood of our company. We are constantly developing new products,” says Makori. “We have a collegial management system where we give members of staff a level playing ground, ability to think independently and critically and do what you would call their ‘own thing’ but within the team.”

The company, he says, has put in place measures to ensure that as each employee works independently, they all work towards a common goal.

“We get a lot more productivity from our staff than if we had a hierarchical management system. Our mean age of employees is 25; generation Y are very restless and they have a lot of energy. You ought to give them an environment that allows them to unleash that energy.”

Makori has big plans for his business.

“I want to list [the company] at the Nairobi Securities Exchange by 2015,” he says, adding that there is increasing appreciation for technology companies among local investors.

“In 2007, my partner and I wanted to sell 25% of Onfon to a mutual friend of ours for KSh 1.2m (about $13,000). It is unfortunate that he did not take it up. He had a front row seat to something great but missed out because he developed cold feet.”

He advises other entrepreneurs to start with the little they have. “Use the resources that you have to grow one step at a time.”

Makori says consistency and focus are the key lessons he has learnt in business.

“When we started Onfon seven years ago there were calls for us to try and do other things like buying land and going into real estate development. But we kept at creating mobile technology software,” he says. “We kept trying to push the limits and did not become complacent when we got our first big cheque. That has put us where we are today. Staying the course has proved to be very beneficial.”