When Tadesse Tessema’s company first started to sell its locally assembled cars in Ethiopia, one of the biggest challenges was to convince the public that its vehicles were of the same quality as the brands imported from the west. 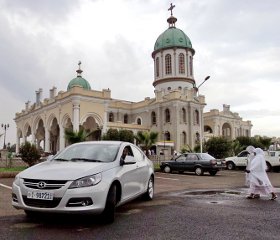 “Our main achievement is that we have been able to change the minds of the people,” says Tessema, general manager of Ethiopia’s first indigenous vehicle assembly company Holland Car.

Born in Ethiopia, Tessema lived in the Netherlands for many years. During his occasional visits to Ethiopia he discovered a big demand for cars. So he created a company which exported used vehicles from the Netherlands to Ethiopia. After a while he, however, spotted an opportunity for local assembly. “I thought, why don’t I go back and assemble new cars in my country.”

To access funds for the new business, Tessema went into a joint venture with a Dutch firm, Trento BV Engineering. This allowed Holland Car to obtain additional funding from the Dutch government. After launching operations in 2005, the company in 2006 celebrated its first assembled car during a ceremony at the Hilton hotel in Addis Ababa.

All car parts are imported from China and assembled at a facility outside the capital. The Daily Monitor newspaper earlier reported that Holland Car used to import parts from Chinese auto manufacturer Lifan Motors. This partnership was later ended and the company currently works with JAC Motors.

At first the assembly plant was only able to turn out one car per day, but following additional investments and facility improvements, the company currently has the capacity to produce up to six units. Tessema wants to increase this to ten cars per day. He also has plans to go from assembling cars to manufacturing the parts as well.

All Holland Car’s models are named after rivers in Ethiopia, with names such as Abay, Tekeze and Shebelle. Tessema says this is to emphasize the cars’ local credentials and to foster a sense of national pride.

Plans are also underway to roll-out a biogas powered car. The goal is to not only assemble the vehicle, but to also produce the gas itself. Holland Car is, however, seeking further government assistance before going into full-scale production. “From the distance we have travelled so far, we have come to the conclusion that there is nothing to hinder us from manufacturing biogas cars here in Ethiopia,” reads a statement on Holland Car’s website. In addition, the company is also marketing a mass transportation bus designed and manufactured in Ethiopa, for both the local market as well as the rest of the continent.

With a population of around 80 million and double-digit GDP growth rates in recent years, many are viewing Ethiopia as the next big investment opportunity in Africa. Last month, Ethiopia’s newfound importance as a business destination was confirmed when it was announced that the 2012 World Economic Forum on Africa will be held in Addis Ababa.

Tessema says that companies like Holland Car are changing perceptions of Ethiopia. He said that “the sky is the limit” for investors looking to do business in the country and that “now is the time” to invest.

Africans themselves need to grab hold of the opportunities on the continent. “Investors from Asia are coming to invest money here, while we Africans still sit down and wait,” Tessema notes.

He believes that the African diaspora can play a significant part in the continent’s transformation. “If 10% of these people can come back to Africa, most of the problems in Africa would be solved. Governments have to give the opportunities . . . and incentives to bring these people back . . .”