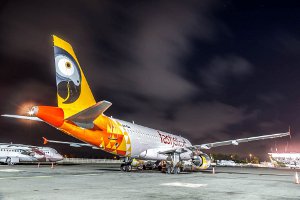 The first flights under the fastjet brand began last week.

Fastjet, which is listed on the London Stock Exchange’s AIM market, today said in a statement that it is in talks to buy bankrupt South African airline 1time that halted operations last month due to financial difficulties.

“The proposed transaction would involve fastjet paying a nominal fee for the purchase of 1time Airline and reaching a settlement with the 1time creditors,” said fastjet in a statement.

Fastjet, which is backed by easyJet founder Stelios Haji-Ioannou, launched operations last week with its first flight from Dar es Salaam to Mwanza in Tanzania. The company plans to become a truly pan-African airline.

Before it suspended operations, 1time was carrying around 120,000 passengers a month. An old and costly-to-run fleet of aircraft has been blamed for 1time’s demise.

“If this transaction goes ahead and the timescales are extremely challenging – we would hope to get 1time flying again in time for the Christmas holiday period, when many customers have had their plans dashed by the cessation of 1time services and the subsequent huge increases in fares by competitors,” commented Ed Winter, CEO of fastjet.

“Flights would initially be operated by a number of aircraft from the 1time fleet including McDonnell Douglas MD-82s, MD-83s and MD-87s, but restructuring plans would see a rapid re-fleeting with modern Airbus A319 aircraft,” he added.

“Air travel in the African continent appears to us to offer an attractive opportunity based on the outlook for economic growth and rising consumer spending in the continent,” says Anthea Alexander, an analyst at Renaissance Capital. “First the vast distances separating Africa’s major hubs, and the infrastructural challenges impeding road and rail travel, present a good case for air travel demand in Africa. We note that the number of passengers flying into Africa has seen strong growth over the years; in 2010 more than 150 million passengers transited through African airports, up 9.5% on 2009.”

She also believes that easyGroup’s association will give fastjet access to a wealth of experience in the aviation industry.

However, according to Alexander, the new airline can expect some turbulence. “Airline capacity is growing in Africa, which implies increasing competition. If fastjet can offer true low-cost rates, we think this will give it a significant advantage over its competitors,” she notes.

EasyJet founder Stelios Haji-Ioannou is certainly optimistic about fastjet’s prospects. “This is another small but significant step in bringing the dream of low-cost air travel to millions of people in Africa – the aviation industry’s last frontier,” Haji-Ioannou recently commented.

“Past experience shows by halving fares, a successful low-cost carrier can encourage those people, who have never previously travelled by air, to fly. For Africa, with its densely populated cities separated by great distances – this means a potential new market of millions,” he added.