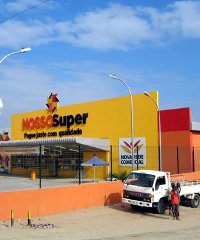 Nosso Super is one of Angola's main retail chains.

After decades of civil war that destroyed infrastructure and ruined the economy, Angola had nowhere to go but up. The return of peace in 2002 led to significant economic growth, albeit from a very low base. According to The Economist, Angola experienced an average annual GDP growth of 11.1% between 2001 and 2010, largely sustained by the oil industry.

“In 2011, it was the second largest African oil producer, with China its main client,” says Euromonitor. “Rising oil prices over the past five years have translated into nearly 55% GDP growth, enabling Angola to climb from being a low to a middle-income country.”

Angola’s retail sector has seen the entry of a number of foreign companies – most notably from South Africa, Portugal and Brazil. Nosso Super is a state-owned chain of 30 stores, launched in 2007. However, mismanagement and an inefficient supply chain led the government to look for a private investor to operate the stores on its behalf. Brazil’s Odebrecht, a major player in oil and construction in Angola, was chosen to manage the business at the end of 2011. This was felt to be a logical move as Odebrecht was also the contractor which built the stores.

In 2007 the Belas Shopping Mall was opened in the capital Luanda. The mall is anchored by a Shoprite and contains 100 other shops. The Ginga Shopping Mall, launched in 2011, is located in the industrial zone of Viana on the outskirts of Luanda, and is anchored by Teixeira Duarte Distribution’s Supermercado Maxi and Bompreço. The only modern shopping centre outside Luanda is the Millennium Mall in Lubango.

There are many risks to doing business in Angola, which cannot be ignored by retailers. Transport networks remain poor and energy supply is erratic. “According to the African Development Bank, only 20% of Angola’s population had access to electric power in 2011, with a lack of electricity considered the first constraint to business (68% of businesses resort to private diesel generators because of ongoing power cuts),” says Euromonitor.

Secure housing is rare and extremely expensive, making Angola the world’s most expensive city to live in for foreigners. According to Euromonitor, “a four bedroom residential house in Luanda would cost $20,000 per month, while rent for retail space in 2011 was a staggering $100 m2, compared to $45 m2 in South Africa.”

“[Angola’s] economic boom is largely dependent on the oil and gas industry, which is by essence volatile and uncertain in this part of the world … However, there is no pressing sign of a downturn in the Angolan economy as the continuing slump in developed markets will further push global investors to position themselves in high-growth emerging markets. Thanks to growing trade ties with BRIC markets such as Brazil and China and an expanding oil and mining industry, the financial risks are largely offset by the high return on investment,” says Euromonitor.