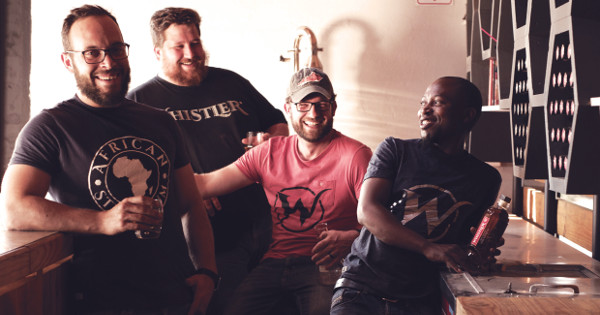 Whistler African Style Rum is looking for South Africa’s most legendary dad. The nationwide “Dad You’re a Legend” Father’s Day Campaign which kicks off on 1 June, aims to find the one dad in South Africa that most personifies the saying “Whistle your own tune”.

In the run-up to Father’s Day, motivated by their own dads who do things a little differently just like them, Whistler rum founders Trevor Bruns, Leon Bruns and Stephan De Vos were looking for a unique way to honour dads who whistler their own tune.

This inspired the campaign, which encourages buyers to buy a specially marked bottle of Whistler and submit an entry on Whistler Rum’s website, explaining why their dad is legendary.

The winning entry stands to win a case of Whistler African Style rum. In addition, the founders of Whistler Rum undertake to personally phone the father of every single buyer who submits his or her dad’s mobile number to wish them happy Father’s Day. Regardless of how many there are.

Says De Vos, “Our dads are a little different. My dad is a mining Eengineer and Trevor and Leon’s dad used to be a doctor. Now they own a WAGYU (a very expensive and rare type of beef that originated in Japan and is known for the distinctive marbling of the meat) farm in the middle of the Free State.

He continues: “This move gave us the strength to turn our lives upside down in a positive way. Trevor and I quit our jobs as engineers and Leon quit his job as investment manager. We went overseas to learn to make rum; returned and put up a rum distillery on the same farm in the middle of the Free State.”

De Vos says given the size of the South African sugar cane industry and the quality of its products, it is surprising that South Africa doesn’t already have a thriving local rum industry, but he maintains the Industry has now picked up, and in a big way.

Through international training, their intense focus on the quality of Whistler African Style Rum and by their love for being just a little different and doing things their own way, the founders of Whistler have placed themselves at the forefront of the South African rum revolution. By developing and trademarking the “African Style” methodology for making rum – a new rum category dictating that, to be classified as such, an African Style rum must be: produced in Africa; produced in equipment designed and built in Africa; distilled by a born and bred African; distilled from locally sourced ingredients and aged in barrels that previously matured other African alcohol-based products.

In the less than seven months the Whistler distillery, which is located on a farm along the R70 between the towns of Riebeeckstad and Henneman in the Free State, grew to what is now arguably the biggest rum distillery in the country.

Whistler, a small batch rum made from brown sugar and molasses sourced in Swaziland and Kwazulu-Natal respectively, is made for life’s band of rebels who swim upstream and don’t let life just happen to them.

The founders of Whistler are on the forefront of the upstream movement. Their signature cocktails the Free Sate Sand Storm (Whistler Spiced Rum, Ginger beer, and bitters), a tribute to the colour of the skies around the farm in August served at the Distillery, is a case in point.

To nominate your dad to be named South Africa’s most legendary dad, buy any bottle of Whistler African style rum; visit the designated section on whistlerrum.co.za, and submit a motivation using the batch and bottle number printed on the back label. Entries close on 16 June.