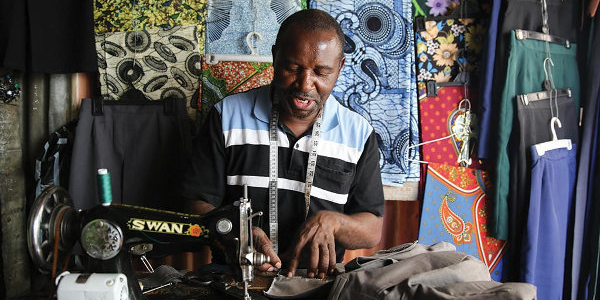 A tailor at a market in Zambia.

We think Chile since the 1960s and Peru since the 1970s offer useful lessons for sub-Saharan African commodity exporters such as Zambia. Ideology will swing with the commodity cycle, and today we believe it is swinging in the right direction to attract investors.

Writing this piece has unexpectedly demolished our faith in the Madison time series of per capita GDP. This claims that Zambia in 2010 had a per capita GDP less than that of Rome when Jesus Christ was born, or perhaps even less likely, Chile in 1850. We think this is wrong. Based on a range of education, health, transport and anecdotal data (just the other day my mate was in 19th century Santiago), we think Zambia today is more comparable with Peru in the 1970s or Chile in the 1960s. This is useful, because while Ethiopia may be tracking China’s model with a 30-year lag, we think it is Latin America that carries appropriate lessons for resource exporters out of Africa.

While academics remain divided on why Latin America did poorly in the 20th century, we like our simplistic explanation that education can explain why Chile is a decade ahead of Peru, and both are two generations ahead of much of sub-Saharan Africa. What interests us is the extent to which sub-Saharan Africa can avoid the mistakes that Latin America made, such as the acute leftward shift of Chile in 1970-1973 and Peru from 1985-1990. Broadly we see sub-Saharan Africa as more private sector-orientated today than Latin America was then. Yet Nigeria, for one, is split, with one Abuja faction echoing Peru in 1985-1990, while more liberal cabinet members are working to prevent this ending in a 1988-1990 Peruvian-style meltdown.

The negatives to avoid are simple to list. Don’t use price controls, try to avoid subsidies, don’t peg your currency, don’t finance the budget from the central bank and be very careful about big increases in government salaries. These policies were part of a state interventionist and import-substituting policy framework in Latin America that led to high inflation, periodic economic collapse and sharp shifts in fiscal policy. On the positive side, these policies might have helped build a manufacturing sector that was 20% of GDP in Chile from 1960-1980 (vs 8.5% of GDP in Zambia in 2015), but even today the majority of exports come from copper (or mining generally) in Chile and Peru.

Diversification via manufacturing achieved limited gains. One lesson is that we should not expect miracles of fiscal restraint from politicians; voters will periodically demand some redistribution of resource wealth.

Zambia is advancing reform as copper prices rise, which is encouraging

We see Zambia as joining Ghana in a shift from populist left-wing spending on wages and subsidies, to a policy stance that favours Ease of Doing Business reforms, supports the private sector, and where the IMF is greeted as a helpful ally rather than an enemy of the state. Zambia’s finance minister is spreading a message that is a welcome contrast to the 2011-2016 period and should attract foreign investment and support growth. We are fundamentally bullish on Zambia given the breadth of its private sector and the significant improvement of human capital over the past generation, but recognise that as in Chile and Peru, there will be periods of sharp currency weakness (when copper prices fall), and populist spending. Although an IMF package is not a done deal, for now we believe the country is in an upswing period of reform and rising copper prices.

In a worst-case scenario, we should expect per capita to rise from around $2k in 2016 using purchasing power parity (PPP) dollars (our estimate) to Peru’s $10k over 35-40 years and Chile’s $20k over 50 years. In a better scenario, where the lessons of Latin America are learnt, much better could be achieved.