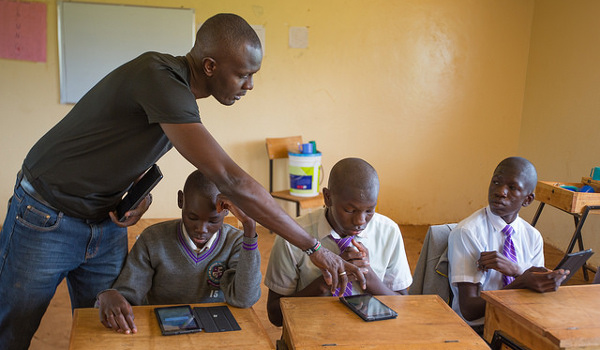 Kytabu – which comes from ‘kitabu’, the Swahili word for ‘book’ – is an innovative textbook content-leasing app for students. Learners can rent textbooks or specific curriculum material on their phone or tablet, and pay for it with mobile money. There is also a service for schools.

“We have got a pretty cool D2C model where a customer can rent a page a day, a book a day, a chapter a day – or for an hour, a week or months. Whatever it is that works for you, based on how much money you have in your pockets,” remarked Kenyan tech entrepreneur Tonee Ndungu, the founder of Kytabu. Ndungu, along with two other entrepreneurs, was recently awarded the King Baudouin African Development Prize.

He spoke to How we made it in Africa about the journey so far. Here are slightly edited excerpts.

What inspired you to start Kytabu?

My dad owns a school. Back in 2012 he was able to provide his students with food, with t-shirts, with school uniforms – but he couldn’t afford the textbooks because they are extremely expensive. And so he came to me and said: ‘Okay, look. You’re in tech, I have a school – can we come up with something?’ And Kytabu was born on the dining room table about five years ago.

Tell us about your biggest mistake, and what you’ve learnt from it.

We always thought technology would be a barrier [to the adoption of our services]. We thought: mobile devices are expensive, there is a lack of internet, a lack of power. So we were slow in implementing – it took us about two and half years to get an application that we liked, and then three years to test it and say ‘this is what we want’.

And we wasted a lot of time. Because between the time we started and the time we were using it, mobile phone use in Kenya had gone up and the cost of phones had gone down. So there was a lot more phones, a lot more users, and we had to pivot our business entirely because we realised one of the risks we thought we would face was definitely not there. We made those assumptions Westerners make of Africa, that ‘technology grows slowly’, and that was wrong.

Marketing – marketing for sure. Traditional media – so TV, radio, billboards, and activations in and around the country. One of the hardest things to do in a country like Kenya, is getting people to know you exist.

We are partnered with publishers as a distribution platform. So it is a 70-30 revenue deal to the publishers – we keep 30%. So essentially what we have done is, publishers who wanted to have their own e-learning platform knew that they would never get books from other publishers because they are competitors. But we have come into the game as an independent, we can do business with everyone because we are in between, we are not allied to one or the other. And that neutrality has given us a lot of favour with our publishers. It is kind of working out well.

What have been some of the biggest challenges you’ve faced so far?

Obviously fundraising is huge, especially fundraising from within the country or the continent. That has been very, very difficult for us. People typically invest more in land and buildings and tractors, than they would in technology companies or agribusiness companies or start-ups of any sort. So that has been one thing.

The second one has been school uptake. In general schools are still run by traditionalists, even if the students themselves are 21st century kids – they want to be advanced but they can’t. It is very, very difficult to convince schools to buy into a technology. But when you do, it works out – but that doesn’t mean it is easier.

How would a school use your product? Do you provide them with devices?

So usually in our case we don’t actually give them devices, we have them buy devices and then we provide them with a server that has all the content. So the school essentially subscribes to the server. And all they really need is a simple server – which is the size of a raspberry pie – and in that we store the content. Basically we establish a direct connection to our service, and we control the content back and forth. So they don’t have to pay for data bundles – that’s what we are getting around. But the school itself must provide their own devices.

Describe your most exciting entrepreneurial moment.

I don’t think those exist. Personally I think every day waking up and being able to pay bills is an exciting moment. I did get to meet Barack Obama last year at the White House.

You visited the White House?

Yeah, I was part of the Eisenhower Fellowship. The Eisenhower Fellows are young Africans who do amazing things. I was selected to be one of those, which is pretty cool and we got an opportunity to visit Barack Obama at the White House last year in September, and got a photo opp on the south lawn, which is really awesome. It was fantastic – shake hands, have a chat, share some information, ask some questions, sit in the Roosevelt room. It is not a big deal for many people – but you know how difficult it is to get in there, and we did.

Scaling. We are going to be having a consultation with the CEO of the largest telco company in Kenya. We are having a general conversation about where we think Kytabu can go and how we are able to make something of it. And so I am optimistic that we can do that. If I can convince him to pick Kytabu as one of his education products, and he can put it out to marketing in his telco company – I mean this is going to scale beyond anyone’s belief.

So we are looking at taking over six countries in the next two to three years. We have the same education system in six countries because we were all colonised by the British. So Kenya, Uganda, Tanzania, Malawi, Zambia and Zimbabwe. If those six countries have Kytabu, then that’s a pretty big deal for us. Especially because the publishers are more or less the same.

Oh, and we are also working with Vodafone.