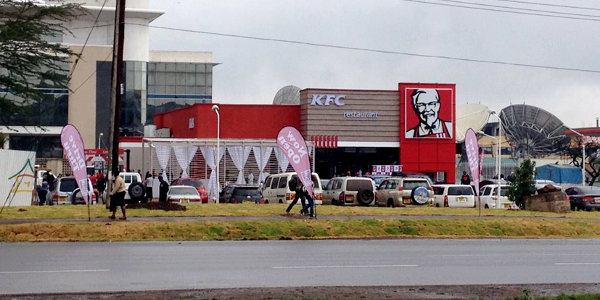 A KFC outlet in Nairobi

“Kenyans love chicken, there is no doubt about it,” says Justin Melvin, general manager of Kuku Foods Kenya – the local franchisee for fast-food giant KFC.

Since it entered the Kenyan market in 2011, KFC has opened 10 stores and plans to add an additional six later this year. Even with a wide selection of international restaurant chains in Kenya, Melvin notes there is potential for many more KFC outlets.

“Kenya is wonderful for its choice of restaurants. But Kenyans, luckily for us, love chicken and they love chips. So we are not worried about getting customers because we are providing what they want,” says Melvin.

KFC initially focused on Nairobi where there is a relatively large number of wealthy and middle-class Kenyans, as well as a sizeable expat community. But this year, three of the six new outlets will open outside Nairobi.

Kenya’s third-largest city Kisumu, as well as the fast-growing towns of Eldoret and Nakuru will be sites for the new stores.

The lakeside city of Kisumu is the commercial hub of western Kenya and supports various commercial activities, including fishing, rice and sugarcane farming, tourism and several light industries. The economies of Nakuru and Eldoret are dominated by farming, trading and manufacturing.

“I anticipate in three years those towns could each support three or four KFC outlets. I think they will grow extremely well because they will be the first international fast-food chains into those towns,” explains Melvin. “I drive around Kenya and I go to those towns. I will tell you those towns are thriving. People think all the money is in Nairobi, it’s not.”

Over the last five years, KFC has gained insight into the Kenyan consumer. In-store dining accounts for nearly half of KFC’s business in Kenya, while take-aways and deliveries make up 30% and 20% respectively.

“Kenyans like to sit down in a restaurant and have their meal, so fast-food takeaways are not necessarily perfect for the Kenyan consumer. There are places in Europe where you will go take your meal and eat as you walk on the streets. A Kenyan will not do that. It is not culturally accepted.

“We do 30% take-away but it is probably people just taking the food home – not because someone wants to eat on the run as they head to the office,” Melvin says.

On the weekends, he notes, most customers come with their families and want to sit and eat together.

“That tells us that our stores need to have enough sitting places on the weekends, which is interesting because we are supposed to be fast food. We have to make sure we have enough seating now, and potentially enough space in case we need to expand in the future.”

KFC has also localised some of its menu items. “We developed ugali (staple food in Kenya made from maize flour) nuggets and now we have got a few loyal customers who love them. I’m not sure Kenyans are brilliant at experimenting – we had to push people to try it, and those that did really liked it.”

KFC is owned by US restaurant group Yum! Brands, which is also the company behind Pizza Hut and Taco Bell.

KFC now has over 1,000 stores in Africa, spread across more than a dozen countries – making it the largest fast-food chain on the continent.