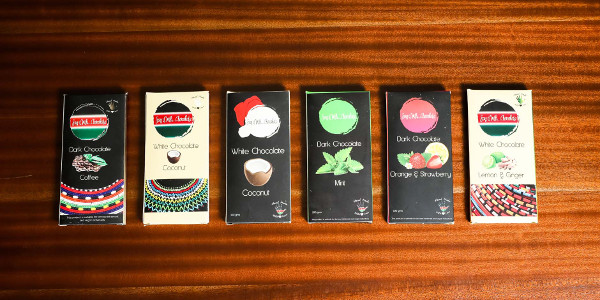 A selection of Say It With Chocolate’s products.

In Kenya, Jazeera Suwani, the founder of Say It With Chocolate, is carving a niche for herself by producing artisan chocolates for vegans and those who are lactose intolerant.

“Making dairy-free chocolate started as a hobby for me because I am lactose intolerant,” says Suwani.

After working as a physiotherapist for nine years, she quit her job to become a full-time chocolatier in 2015.

Say It With Chocolate’s products are made from high-quality cocoa and unrefined sugar. It comes in a variety of sizes and price points.

Suwani started by producing two types of health bars, and later expanded into chocolate, which she retailed at a local farmer’s market. Today her business produces 52 flavours of chocolates, of which 20 are readily available in the market. The remaining 32 are made to order, as well as sold at craft fairs and during celebrations like Christmas and Diwali.

“Flavours like banana and cinnamon are not common with people, but when we do it at craft fairs, people buy them. We also make the flavours in season. For example, I recently made the milk-and-cookies flavour. I will run that for six to eight weeks and then we will phase it out and put in another flavour. So it basically keeps things exciting.”

“Over the years, I realised there is a growing demand for organic, dairy-free chocolate among consumers because there are many chocolate lovers like me who are lactose intolerant,” she explains.

“Everybody thought I was crazy for leaving a white-collar job to go into something that is not a tapped-into market. But it was a chance that I took.”

Say It With Chocolate’s production has increased from 10kg a month in 2015 to about 200kg currently. “The reception in Kenya has been good generally. There are people who are educated about chocolate, who really know the value of handmade, dairy-free chocolate,” Suwani says.

Suwani is a first-time entrepreneur. She started out with only a little capital from personal savings and her gut instinct. But, without adequate market research, she soon made some bad business decisions.

“I thought the only way for me to get into the market is through craft fairs. I invested the little money I had to pay for these fairs without getting concrete information on whether it was for my target market or not. I also didn’t do the necessary background research on who will want my product and who will spend money on my product. So I lost a lot of money.”

But this year Suwani conducted a proper study on her target market to boost sales.

“When I did the research on what craft markets or persons I will be targeting, I was able to save some money,” she says. “I was not wasting a lot of money like before or paying for spaces that are not beneficial to me.”

She also brought on board a mentor who helped in various aspects of the business. “I got a mentor about three months ago. We were having a conversation and he asked to see my accounts. He is now an investor in the company and he has actually helped to shape my business such that I am now able to manage the capital and stop buying things that are not really necessary.

“For instance, I used to buy ‘thank you’ gifts for my clients any time they patronise me, but he told me that while appreciation is good, it doesn’t have to be very often. When I stopped giving these regular ‘thank you’ gifts, I realised that customers still patronise me as much as before and they also buy it in the supermarket. He has given me the knowledge of how to build a business.”

Although Suwani currently operates her business from home, she is constructing a small commercial kitchen in Nairobi. The month of October also saw her first international delivery, and the introduction of white chocolate made from skimmed milk.

Over the next six months, she hopes to get Say It With Chocolate into as many outlets as possible. There are also plans for a retail store and competing in the international market.

Her advice to others looking to start a business is to keep their ideas to themselves, lest someone copies it. She adds it is better to “start small” and “go slow”, but not to the extent of being too cheap.

“You also need to involve your customers in your growth. When you do, they get excited about you. A lot of my flavours are due to feedback from customers because they ate something when they were young and they want to recreate those memories. By engaging my customers every step of the way, I was able to grow my business from two health bars to 52 chocolate flavours.”