Although he accomplished much during his lifetime, John Deere most likely never dreamt of the levels of success his agricultural equipment company would go on to achieve after his death. He probably also never thought that the company’s products would one day be sold in South Sudan. 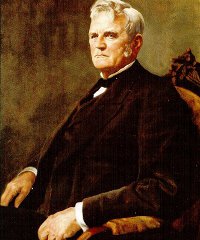 Deere was born in 1804 in the north-eastern US state of Vermont. His family was poor and Deere only received a basic education. At the age of 17, he apprenticed himself and learned the trade of blacksmithing.

In 1827, he married Demarius Lamb. For the next decade, Deere and his growing family would move from town to town searching for steady work. At one point, he borrowed money to buy land and built his own blacksmith shop, only to have it destroyed by fire not once, but twice.

The fires had left Deere deeply in debt and in need of a stable income. It was the 1830s, and fellow Vermonters shared Deere’s economic troubles. The state’s rich timberland had been cut down, land was losing value, and the formerly rich and protected soil was washed away by a series of disastrous storms. A grasshopper plague weakened crop yields.

Searching for a fresh start, many Vermont farmers began moving west to the prairies of Ohio, Indiana and Illinois. With significant debts, Deere made the hard decision to leave his family, including a pregnant wife and four children, and head west to seek his fortune. After a several week journey, he settled in the village of Grand Detour, Illinois, where he quickly established a small blacksmith shop.

It wasn’t long before he heard tales of frustration from the transplanted Vermont farmers, struggling to break the tough prairie sod. Their cast-iron ploughs that worked so well in the light, sandy New England soil, performed poorly in the sticky soil of the Midwest. Soil clung to the plough bottoms and had to be removed, by hand, every few steps, making ploughing a gruelling and time-consuming task. Deere realised that a plough with a highly polished surface could clean or scour itself as it moved through the field.

One day, in 1837, Deere saw a broken saw blade in the corner of a sawmill and asked the owner if he could take it back to his shop. There he fashioned the world’s first successful steel plough.

So Deere set to work building steel ploughs, continually improving the design to set his product apart from competitors. In 1848, Deere moved his operation to the town of Moline, Illinois. Within a few years, production had reached 1,600 ploughs a year. By 1858, Deere had turned over management of the business to his son Charles.

John Deere died in 1886, at the age of 82. His descendents or their spouses went on to lead the company.

Today Deere & Company is a giant firm with operations across the world. Besides agricultural equipment it has also diversified into a variety of other products. The company is ranked in 98th position of the Fortune 500.

Lonrho, the London-based Africa-focused investment company, has recently announced that it will become the exclusive John Deere dealership in South Sudan. Lonrho already operates John Deere dealerships in Angola and Mozambique, and will also expand its operations in Tanzania. The company deals mostly in tractors, but also supplies other related equipment such as harrows and ploughs.

At independence there was much optimism that the South Sudanese economy would finally take off. The region has few industries outside the oil sector and almost non-existent infrastructure. Lately, however, there have been renewed clashes between Sudan and its newly independent neighbour, South Sudan, sparking fears of an all-out war.

Geoffrey White, CEO of Lonrho, doesn’t seem too concerned about the recent unrest. “Clearly the transition and the separation of the two countries is taking some time to settle down … We are still pushing on with setting up our facility,” he said in an interview with How we made it in Africa.

Lonrho supplies John Deere equipment to both large commercial projects as well as smallholder farmers in the African markets where it operates. “We do supply top-of-the-end very, very expensive tractors, combine harvesters and top-market stuff to huge commercial farming operations. We have also become very competitive as John Deere in the lower-end of the market, supplying equipment to smallholders …”

In Mozambique John Deere and Standard Bank have done a promotion where for a US$5,000 deposit, farmers can buy $35,000 worth of agricultural equipment, including a John Deere tractor, a plough, a harrow and other ancillary products. The loan is repayable under a long-term payment plan. “The strength of that is it reduces substantially the entry point of the small farmer to become a mechanised farmer,” says White.

“There have been too many people in Africa, who have gone in, sold a tractor, made some money, and gone off again. What we are very focused on is building long-term businesses to distribute agricultural equipment. We are not just selling tractors, we are putting in service, we are training people, we are putting in maintenance capabilities,” explains White. “The right approach to distributing equipment in Africa is to put in the support … We’ve seen that having a huge beneficial effect … When we started in Mozambique 35% of the tractor market was controlled by John Deere; that has probably risen to 75% now, purely because we have given the backup, we have given the maintenance capabilities, you can get spares for your tractors. It is all about providing that continuity.”

According to White, there are currently two factors driving interest in Africa’s agricultural sector. The first is increasing consumer demand on the continent. “Within Africa you’ve got a billion people. You’ve got a growing consumer market.” He says rising incomes on the continent is pushing demand for better quality food.

The second aspect is that agricultural products are being cultivated and processed in Africa for export to international markets. “Africa is one of the main potentials in global production. So what you are seeing is more of the global retailers looking to Africa to actually be part of their supply route. Not just to look at an African market, but to look at a global market.”