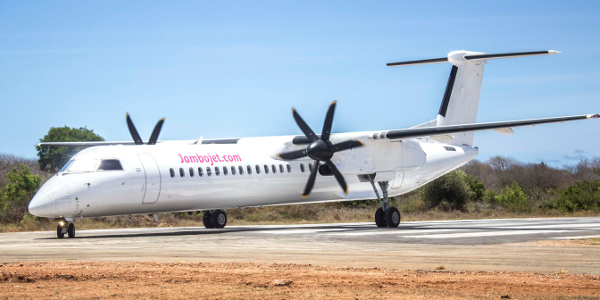 The no-frills carrier, launched in 2014, currently operates local flights between the capital Nairobi, Mombasa, Kisumu, Malindi, Eldoret, Diani and Lamu. Flights start from around Ksh.3,200 (US$31) and Jambojet’s CEO, Willem Hondius, says the lower fares have made air travel feasible to more Kenyans – with about a third of its passengers being first-time flyers.

“A lot of people move within Kenya by bus, but those bus trips take a very long time. For example, Nairobi to Mombasa is only 500km but the bus trip takes you seven to eight hours, sometimes nine hours… And so what you see is a lot of people moving from bus [travel]… who have never flown before. You can recognise them when you see them at the airport – they walk around wondering where to go or what to do. So you create a new market.”

The airline now plans to deploy a similar strategy in regional markets. According to Hondius, in some cases it will operate flights alongside its parent company on routes where it sees growing demand. This includes cities in Uganda, as the country does not have a national carrier to compete with.

“For example, in Entebbe, where Kenya Airways is operating five times a day – there is room to grow that market by flying next to them,” Hondius explained. “We have done the same with domestic routes like Mombasa and Kisumu.”

The airline is also looking to open up new routes to various regional secondary cities, such as flights from Nairobi to Goma and Kisangan in the DRC (Kenya Airways only flies to Lubumbashi and Kinshasa).

A number of African national carriers and low-cost airlines have faced financial difficulties or bankruptcy over the past decade or so. For example, Zambian Airlines was forced to suspend its service in 2009 due to rising costs, while budget airline FastJet had to scale back routes in recent years. In South Africa, 1Time and Skywise are two examples of low-cost airlines that have failed to compete.

To avoid making similar mistakes, Hondius said Jambojet is taking a slow approach to growth and choosing its routes strategically.

“What you should not do… is think that markets will grow by simply offering lower fares. With a lot of these markets there simply is not enough traffic to do so… You have to fly the right routes and you should not grow too fast, because then you [start] adding loss-making routes and things go wrong,” he continued.

“So [the strategy is to] grow slowly and only in those markets where there is real growth potential… in Kenya [as well]. We have 45 million people living here but only a very limited portion of the people can afford to fly. The middle class is growing but you cannot compare it with Europe, the US or Asia… where the buying power is much higher than in markets like Kenya.

“South Africa is different. You have many more people who can afford to fly but you have to be careful that you don’t grow too fast.”

He added that Jambojet is not yet looking to expand beyond its regional markets, as long-haul flights cut into its competitive cost structure.

“The longer the trip, the less advantage we have… because your fixed costs (the aircraft, crew, fuel – those kinds of things) don’t differ that much from others. It’s all about distribution, organisation – those things make the difference. So the moment you start flying longer routes, the portion of the costs becomes more and more fixed,” he explained.