In 2005, 14-year-old Neftaly Malatjie looked around his community in Diepsloot, a poverty-stricken settlement in the north of Johannesburg, South Africa, and decided he wanted to help. 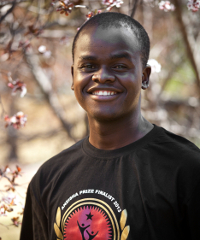 He noticed that a lot of young people in his community were moving towards a life of crime and substance abuse, trapped in the cycle of poverty. At the time Malatjie was part of an acting school in Soweto and realised he could keep young people, including himself, busy with positive activities. So he started a drama and theatre group.

This small initiative turned into Diepsloot Youth Project, a non-profit community training centre that has since trained around 1,500 people in various skills, from computers to entrepreneurship to life skills such as applying for jobs and career counselling.

“There was a need for training within the community because people had to travel to the cities and towns which are way too expensive for them and some could not afford the courses offered by higher institutions and universities. So we have provided training for those young people for free or at a rate that they can afford,” Malatjie told How we made it in Africa.

Other courses, such as the accredited computer training course, cost a small fee, which is used to pay the salaries of the staff employed by the Diepsloot Youth Project. The organisation also relies on volunteers and donations and, according to Malatjie, assists around 117 people on a weekly basis.

“The happiest moment for me is going into my centres and finding the centres so full of people receiving different kinds of services.”

Last year Malatjie was selected as one of 12 finalists for the Anzisha Prize, a competition which recognises entrepreneurs across the African continent between the ages of 15 and 22 who are using entrepreneurship to solve problems in their communities. He was also the recent recipient of an award from the Rand Water Foundation.

Making it as a social entrepreneur

Now at 23 years old, Malatjie believes that the reason he took a positive direction with his life – instead of following many of his peers into a life of crime and substance abuse – was because he surrounded himself with the right people early on. He added that the lack of role models for young people in communities such as Diepsloot is a major concern, and he advises aspiring entrepreneurs to seek advice from those who have made it.

“I associated myself with people who I know have made it in life. I got to listen to what is it they have been through to get to where they are at the moment.”

According to Malatjie, the biggest business lessons he has learnt include the importance of delivering a service that leaves clients satisfied, and being careful when it comes to spending money. “You need to be careful especially when it comes to money because a lot can go wrong. Especially when you are really young you always think of big salaries and lots of spending.”

His future plans include offering more courses and expanding to other areas in South Africa where community youth training is both desperately needed and lacking.