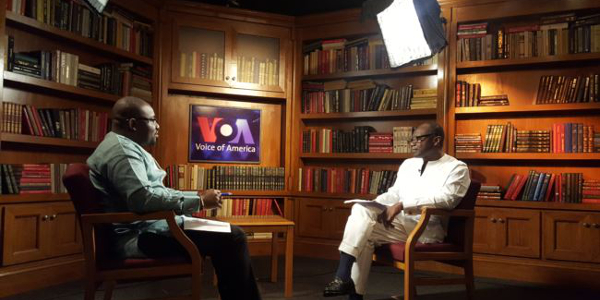 In an interview with VOA, Ken Ofori-Atta said investors detected a new energy, and a sense of hope in a team that is focused on getting Ghana out of its current predicament. He also said that with a new government in place, the world is ready to see Ghana shine again in a much more stable West Africa.

“We came in on a platform of change and real hope that we will revitalise the economy and create jobs and there would be growth,” Ofori-Atta said. “But we met some pretty difficult challenges with regards to fiscal deficit close to 9%, lots of unemployment, growth of 3.4%, which was very low, and the discovery of some seven billion cedis (US$1.3bn) arrears that we all did not know about. Foreign exchange was low, and you also had the exchange rate in a pretty difficult situation. So we had to contend with all of that since we came [to power].”

But opposition groups say the new administration should get to work rather than complain about the state of affairs. They contend that Ghanaians displayed confidence in them by rejecting the previous government for failing to improve the lives of its citizens.

Ofori-Atta said that in just over 100 days, the government outlined its plans to jump-start the economy in a budget, which was presented to parliament. The aim, he said, is to create millions of jobs as the ruling party, led by president Nana Addo Dankwa Akufo-Addo, promised ahead of the December elections.

“We decided to create a budget that is both leading to a fiscal consolidation in a real way and also not compromising growth,” Ofori-Atta said. “So we brought down the deficit as a target from 8.7% to 6.5%. We squeaked out a primary balance surplus. We’re reducing our debt-to-GDP ratio from 72.5% to 70.9%, and then increase revenue by 34%. So, quite dramatic contraction in a sense. However, we also were clear that we needed to spur growth.”

One means to achieve their goals: abolishing some taxes.

“One of the most dramatic things was to abolish about 14 taxes, which the senior minister [Yaw Osafo Marfo] termed to be nuisance taxes,” Ofori-Atta said. “Taxes that were kind of suppressive and created a sense of cohesion by the state. As a center-right party, we have to revitalise the economy, we have to give stimulus, we have to encourage people to use their creative energies.”

Ofori-Atta also said abolishing the taxes will free Ghanaian businesses, and entrepreneurs will help to “bring Ghana back” into a working mode.

Another measure the administration plans to implement is the revitalisation of the rural economy. This, he said, includes establishing a factory in each of the country’s districts, as well as sending $1m to each constituency as a resource to support the policy of one district, one factory, which was promised by the president in the run-up to the polls.

Critics, however, say the one district, one factory promise was overly ambitious. They contend that with the dramatic reduction of taxes, government revenue would be sharply reduced, thereby handicapping the ability of the administration to raise the necessary funds it needs to keep the promises to Ghanaians. They also say the reduction of taxes was just a ploy to score political points.

But supporters of the ruling party reject the criticisms as unfounded. – VOA