It is early morning in Kenya’s capital Nairobi. The traffic jam along Ngong Road, one of the city’s main feeder roads, stretches for kilometres as matatus (taxis), buses and cars try to make their way into the CBD. At the top floor of Bishop Magua Centre complex, sitting just off Ngong Road, Antony Njoroge is already at work, typing away at his computer, a mug of freshly brewed coffee beside him. He is the founder of RevWeb, a local software development company. 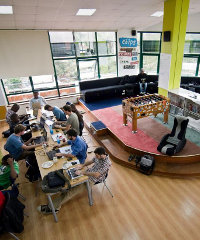 The growth of Kenya’s iHub shows how ICT in the country has advanced over the past 15 years.

Njoroge works out of iHub, a working space that hosts developers, designers and others working with technology software. It is one of the most well-known tech hubs in Africa. In just four years since its founding, the iHub has over 13,000 members in its online and offline community, held close to 500 events and had over 50 companies calling it home.

The growth of iHub represents how information and communication technology (ICT) in Kenya has advanced over the past 15 years. This digital revolution started in 1999 with the entry into the market of KenCell (later Zain, and now Bharti Airtel) and Safaricom mobile network operators. In 2001, the Communication Commission of Kenya reported that the number of mobile phone subscribers had “increased to a staggering 330,000”. Looking back, that figure seems laughable; in 2013 the same commission reported 30m subscribers.

The scene is no different across Africa; mobile phone penetration has grown from 1% in 2000 to 54% in 2012. Today there are more than 754m connections in sub-Saharan Africa and over 35 mobile network operators in Africa. Several countries, such as Seychelles, Tunisia, Morocco and Ghana, have mobile subscription penetration rates in excess of 100%. Tunisia, at 120%, has 10.8m more cellphone connections than it has citizens.

There is no doubt that mobile infrastructure has become as important to national economies as road or energy infrastructure. Aside from providing voice and internet access, mobile networks in some African countries now facilitate more individual and small business financial transactions than the banking industry. Kenya’s M-Pesa, a SMS-based money transfer system, moves over US$24m each day, about $8.8bn annually – or 40% of the country’s GDP – within its 17m strong user network.

EcoCash in Zimbabwe, run by Econet Wireless, signed up 2.3m Zimbabweans in just 18 months after its launch in September 2011, outnumbering all of Zimbabwe’s traditional banking accounts combined. Over a million of these accounts are active and push about $200m of volume over the EcoCash platform every month, according to the Global Strategic Marketing Alliance, a global consulting firm.

The second wave of Africa’s digital revolution came in the latter half of the last decade, with the connection of the continent to the rest of the world via undersea fibre-optic cables. These cables have dramatically increased the transmission capacity of data and drastically reduced transmission time and costs. Prior to fibre-optic installation, internet service providers relied on satellite connections, paying up to $2,300 per month for basic satellite connections. Using fibre-optic cables, they can now get the same connection for less than $100. It is on this wave that tech hubs such as Kenya’s iHub, Tanzania’s Kinu, Nigeria’s CcHUb and South Africa’s JoziHub came into existence.

There are now 16 undersea cables connecting Africa to the Americas, Europe and Asia. All but two countries – Eritrea and Western Sahara – with a coastline have a cable landing on their shores, tripling the internet capacity in Africa over the past three years. A single cable can have multiple docks. For example, the Seacom cable serves Kenya, Tanzania, Mozambique and South Africa.

The number of internet users on the continent grew at seven times the global average, clocking more than 3,600% growth between 2000 and 2012, to 167m users, according to data from Internet World Stats, a website that tracks internet and social media usage. In Kenya, which has been Africa’s leader in internet usage growth, the Communication Commission of Kenya reports that internet users grew from 200,000 in 2000 to over 19.6m at the end of last year, a staggering 9,700% growth.

However, as impressive as the numbers look, it has not been all smooth-sailing. Take the case of South Africa, for example. Over the next few years, South Africa expects an additional four fibre-optic cables to link it to the rest of the world, increasing its capacity significantly. However, players in the market are not convinced the new cables will make a difference due mainly to connectivity problems.

“Whilst some of these new cables will no doubt change the supply situation which will reduce the cost of international capacity, I don’t think they’ll have a big impact for the vast majority of users in southern Africa; most costs are domestic rather than international,” Mark Simpson, the CEO of Seacom, a submarine fibre-optic company, told Africa in Fact, a publication of Good Governance Africa, an advocacy group.