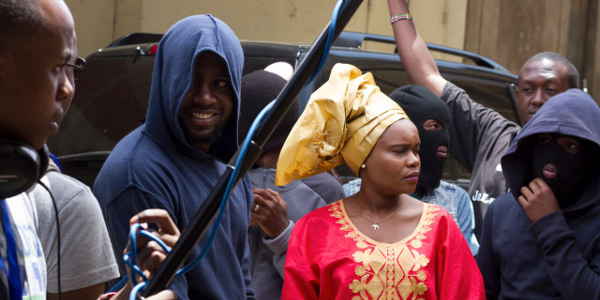 Shooting Tuko Macho on the streets of Nairobi.

The online space has revolutionised how audiences consume media by liberalising access to content and encouraging social interaction. And a new Kenyan web series is taking advantage of this.

Tuko Macho (which means ‘we are watching’ in Kiswahili) is a fictional series about a vigilante group in Nairobi that kidnaps criminals and asks Kenyans to vote online for whether they should live or die. Once the polls are closed, the verdict is carried out. And in this imagined world, Kenyans can be merciless.

The show has already garnered over 1.1 million views since its pilot episode was released in mid-June this year.

Tuko Macho is the product of The Nest Collective, a Nairobi-based media organisation focused on film and visual arts. It is distributed for free on the group’s Facebook page and website, and has sparked long threads of discussion on social media.

“We deliberately chose to put the episodes on Facebook just so the audience could have a very direct portal for feedback,” the show’s producer, Njeri Gitungo, told How we made it in Africa.

“There have been people who have come with very in-depth political opinions about why they agree or don’t agree with what is being said in the series… and it allows strangers to interact and have those conversations.”

While The Nest Collective has invested in some online advertising, most of the marketing has come from online sharing and word-of-mouth.

“The response has surpassed our expectations,” says Noel Kasyoka, the show’s cinematographer. “I think it touches on issues that affect a lot of Kenyans, and many of us think about, hence the discussions on Facebook.”

“The power of social media is unmistakable,” adds Gitungo. “It has given people the opportunity to have an individual voice that can be heard by anybody on a more equal footing… In Kenya, especially, the public space has been able to gather in a digital way and it has been so profoundly politicised.

The opportunity for web series in Africa

While web series are still young on the continent, Gitungo believes they have a strong future – mainly because they encourage social interaction and can be easily watched at anytime, anywhere.

“Companies like Netflix have had a head start in other parts of the world, but we are also seeing people experiment more and more with online platforms for Africa – like iROKOtv, which focuses on Nigerian films… There is a shift in traditional media, where people can be a lot more social and interactive. Sometimes TV doesn’t really allow for that.”

She adds that the onset of mobile phones has been particularly influential in changing media consumption patterns in Africa.

“We have found that 65% of our audience is watching Tuko Macho on mobile devices. And with this direct and increasingly affordable access to the internet, there is something very interesting happening in the way people are consuming media on their phones – for example while transiting to work or when with friends.”

Tuko Macho is not earning revenue at the moment, but Gitungo says that the team is using the series to better understand the consumption and engagement behaviours of audiences in Kenya.

“And definitely with this information we will be able to hypothesise new models for payment,” she says.

“So far there has been an under-investment in this kind of research and in finding the exact way in which people are willing to pay for online media like this. But payment would have to be easy and it must provide immediate access.”

In addition to traditional advertising, Gitungo sees an opportunity for product placement as a potential revenue strategy.

“I think product placement can be very effective. For example, how a car is used in a particular action movie – those images stick with the audience,” she notes.

“So there is definitely room for this sort of thing, not only in our work, but in Africa in general. And not just for global brands, but also for local brands and products.”

“But right now it is very experimental, and we are learning as we go.”