During a recent interview with How we made it in Africa, Ulric Charteris, co-founder of Roots Marketing Communications, shared some insights into Tanzania’s advertising market. 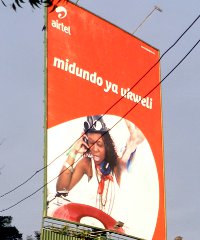 Due to overcrowding, brands are finding it increasingly difficult to get their billboards noticed.

While online marketing is becoming increasingly popular in the developed world, Charteris says that Tanzania still has very few internet users. According to Socialbakers.com, Tanzania, with a population of around 45 million, has less than 500,000 Facebook users. Kenya, with a population of just over 40 million, has nearly three times as many Facebook users.

Charteris sees significant opportunities for advertisers to target customers through their mobile phones. “Mobile is huge, but incredibly under-tapped. Nobody has taken full advantage of the mobile situation, which is something I’m moving into now.”

Because Tanzania is a relatively literate society, newspapers are also an important medium for advertisers. However, because there are so many publications, companies generally have to advertise in a number of newspapers to reach a significant percentage of their target audience.

Charteris notes that outdoor media, such as billboards, are very popular, but that the space is becoming crowded, and brands find it difficult to get their advertisements noticed.

Although television penetration in Tanzania is low, larger companies need to have a presence on television. “TV is vital. If you want to be a big brand, you have to show you are a big brand by being on TV.”

Radio has nearly 100% penetration in Tanzania. However, Charteris notes that certain products and services are not suitable for radio advertising because listeners can’t see anything.

Interestingly, Charteris explains that activations, which can include events and promotions, are very popular among Tanzanian brands. He says that some large brands spend up to 70% of their marketing budgets on activation ideas, rather than on traditional television, radio or print campaigns. “A lot of it is just going into the market, with a truck, with a PA system, and promotion and loud music.”