Modern trade is growing in Kenya, especially in Nairobi and emerging secondary cities. The four big supermarket chains in the country rake in billions of shillings in sales annually. But their numbers still can’t beat that of the over tens of thousands of kiosks and small shops that operate in the country. 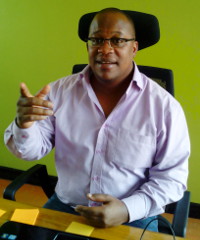 The majority of Kenyans, especially those in rural areas and low-income earners in the cities, still shop at small informal outlets. Despite the significant potential the market holds, manufacturers face immense difficulties in distributing goods to far-flung small traders.

“Mass market distribution is messy, it is risky and it is everything nobody would love to do,” says Ng’ang’a Wanjohi, founder and CEO of Kaskazi Network.

Established in 1999, Kaskazi does the ‘last mile’ distribution of products on behalf of fast-moving consumer goods (FMCG) companies. It has a team of 500 motorcycle sales representatives that supply goods to informal shops and kiosks.

Wanjohi explains that his sales representatives go to their assigned wholesaler every morning to collect goods for supply to kiosks on a pre-determined route. In the evening they return the money collected to the wholesaler, and park the motorcycle they use at its premises.

Initially Wanjohi used “foot soldiers”, but they could not carry bulky products and would get tired from walking. So he started employing bicycles. But today his fleet mostly comprises motorcycles, which are even more efficient.

Beyond supplying goods, Wanjohi’s team collects vital information from traders that manufacturers use to compete, grow their sales and reach targets.

“When you sit down with that kiosk operator over a bottle of soda they give you very important information. You get insights on the competition, why a specific product is not doing well and whether or not there are counterfeits in the market. You ask them what you can do for them to increase the amount of product X they stock.

To avoid conflict of interest, Kaskazi does not work with competing brands. “Our strategy is to kill the competition,” he says.

‘A market you can’t ignore’

When he started the business 15 years ago, Wanjohi faced difficulties convincing consumer goods manufacturers that this model would work. But in 2006 one of the largest grocery chains in Kenya – Uchumi Supermarkets – went bankrupt and closed its stores.

Manufactures had not only lost a big client but they also could not get paid for goods already supplied.

“It is only then that they started looking at other avenues. Before that we struggled to convince companies there was potential in this market. Many big consumer goods companies did not believe this concept could work. They wondered: how do you sell on a bicycle? How many kiosks are there? What is the market potential? And who are you anyway? It was tough,” recalls Wanjohi.

Many people who shop in kiosks and small shops are waged employees who do not have a lot of disposable income, hence they buy products in smaller quantities to meet their immediate needs and still be within budget. But because of the sheer number of customers who fit in this category, Wanjohi notes the potential for manufacturers is “huge”.

He reveals that every month Kaskazi handles goods worth Ksh.200m (about $2.2m).

“This is a market you can’t afford to ignore.”