Good, quality milk is one of the most nutrient-rich natural beverages available. Containing a healthy dose of at least nine essential vitamins and minerals, milk can be, quite literally, a lifesaver for populations suffering from an extremely nutrient-poor diet in developing countries. 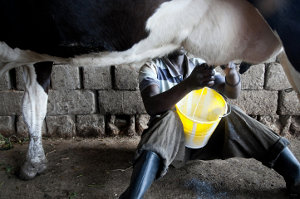 In early 2010, Dr. Josh Ruxin, an American global health expert and founder of “The Access Project,” a NGO in Rwanda, decided something needed to be done to fix Rwanda’s dairy problem. After nearly a decade of working to improve rural health facilities across Rwanda, Ruxin understood all too well the negative effects of malnutrition on Rwandan citizens.

His solution? Not another charity. Instead, inspired and supported by the Rwandan government’s “investment over aid” approach, which has been a central pillar of President Paul Kigame’s “Vision 2020” development agenda, Ruxin opted for a for-profit social endeavor, called Rwanda Ventures.

The company, founded in 2010, seeks to invest in profitable, market-based approaches addressing the nutrition challenges currently confronting Rwanda. “The goal,” says Ruxin, “is investing in the future of Rwanda’s health.”

Kivu Dairy partners with farmers, cooperatives and dairy processors to lower the cost of milk to the point where Rwandans can afford it for their children, “the majority of whom are chronically malnourished from carbohydrate-rich, protein-poor diets” Ruxin says.

The dairy industry was a clear starter for several reasons. According to a recent report from Technoserve — an international NGO — an astounding 96% of the milk marketed in Rwanda is done through the informal markets. In most cases, milk is carried down from the villages in old yellow jerry cans by farmers with just a few cows, and brought to the edge of larger towns. There, one person tests the acidity (but not necessarily the quality) of the milk. If it passes, farmers can then take their milk to informal roadside vendors for sale. If it fails, the farmers leave empty handed.

Currently, most small Rwandan farmers have little incentive to produce higher quality milk. They are given a flat rate (around US$.25 per litre) to meet basic quality standards. Kivu Dairy’s business model hopes to change this, Ruxin says, by giving farmers a financial incentive and guaranteed market for higher quality milk.

Kivu Dairy’s first milk collection center, in the northwestern city of Gisenyi, is Rwanda’s first private milk collection center. It’s also the first one solely focused on obtaining nutrient-rich milk, for which Kivu Dairy pays a 25% to 35% premium on the current market price. If farmers have trouble producing the quality levels that Kivu Dairy demands, the company will help them achieve it through free training on collection methods, filtering, feeds, free testing of the milk and other quality control factors.

Over the next eight years, the Rwandan government has set a goal of increasing per capita milk consumption five-fold, and has recently invested in creating 50 small milk collection centres run by locally established cooperatives. If Kivu Dairy’s model proves successful, the company hopes to expand by convincing the government that they can run these collection centres and turn them into profitable enterprises, benefiting both the government and local farmers.

Yet as Kivu Dairy struggles to make its first collection center profitable enough to begin replicating across the country, it won’t be easy. Investing in collection centres and training for farmers isn’t cheap, and building trust with local farmers takes time.

Their biggest challenge, though, appears to be in changing the methods, habits and traditions of milk collection, many of which have been passed down for generations. Something as simple as convincing farmers that letting young calves drink milk straight from their mothers will reduce the cow’s output, remains a difficult endeavour. Tradition is often resistant to change and farmers sometimes can grow impatient when new production methods don’t immediately pay off.

With Rwanda’s recent economic growth, there are many opportunities for industries like dairy to become more organised and formalised, leaving a wide range of opportunities for socially geared companies like Kivu Dairy. While Rwanda Ventures explores other gaps to fill in the markets surrounding nutrition and food security, Ruxin, alongside many others, is watching carefully to see if a model like this can benefit both the people of Rwanda, and his investors.