The Democratic Republic of Congo (DRC) has large areas of arable land and is awaiting “big investments”. 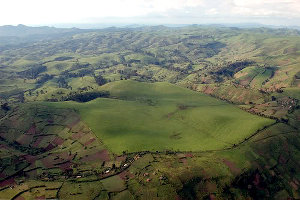 The DRC has vast areas of unexploited land.

So said Jean-Marie Bulambo Kilosho, the DRC’s Minister of Economic Affairs, at a recent conference in Cape Town.

With a population of more than 70 million, a projected GDP growth of 6% for 2011 and significant untapped minerals and other resources, the DRC certainly holds much potential for business.

However, for many foreign investors, the DRC’s political climate is a major concern.

“The current political situation of the DRC is like in any other post-conflict country,” said Leny Ilondo, a businessman and former government official, in an earlier interview with How we made it in Africa. “The DRC is mostly at peace despite a few locations where militias are still very active. The government is determined to overcoming those elusive militias located mainly in the eastern part of the country. The militias focus on extracting minerals illegally. For the rest of the country, the three branches of the government strive to settle. They are working hard but haven’t met the population’s high expectations . . . The people of the DRC want jobs and are tired of war.”

Given the DRC’s vast size (227 million hectares), its arable land of about 7 million hectares, is relatively small. To compare, Nigeria, South Africa and Tanzania each has 28 million, 15 million and 4 million hectares of cultivatable land, respectively. The opportunity, however, lies in the fact that while most of South Africa’s land is already under cultivation, in the DRC large areas are lying idle. According to the FAO, agriculture in the DRC remains “insufficient”.

During his presentation, Jean-Marie Bulambo Kilosho said one of the reasons for the limited exploitation of the DRC’s agricultural potential is because of poor road and rail infrastructure.

The Minister highlighted the potential for the fishing industry. He said despite the DRC’s various inland water bodies and Atlantic coastline (37 km), there is still a huge fish “deficit”.

The majority of processed products are currently being imported from European countries and South Africa, creating opportunities for local manufacturing.

Doing business in the DRC

The DRC is not a market for small businesses without the capital to do adequate research and afford the country’s high operating costs.

So says Jeremy Wiley, a well-known South African businessman who recently established a property services firm, CongoProp, in the south-eastern city of Lubumbashi.

Wiley told How we made it in Africa in an interview that the DRC is an expensive country to visit. He said that flights from South Africa to either the capital Kinshasa or Lubumbashi can be costly, and that hotel rates are also steep.

“It is not an easy environment . . . but if you do your homework systematically, then I believe you can identify very good opportunities,” he said.

Wiley said that despite the difficult operating conditions, all indications are that the DRC’s economy is moving forward. For example, there has been a noticeable improvement in Lubumbashi’s infrastructure during the time between his visit to the city in July 2010 and May this year. “The Chinese presence in the DRC is growing strongly. The investment by the Chinese in road infrastructure in the Katanga region has definitely started to pay off.”

He emphasised the importance of doing proper research before entering the country. “It took us about 18 months to research the potential in the property industry before we committed ourselves to establishing a business in the DRC. You need to do that research on the ground in the DRC, and make sure that you ask the right questions to the right people . . . you need to look at it in a hard-nosed business way.”

He advised companies looking for information on business opportunities in the DRC to make contact with ANAPI, the country’s investment promotion agency, as well as the Fédération des Entreprises du Congo (FEC), the local chamber of commerce organisation.

Wiley noted that there are various reasons why investors in the DRC should take on a local partner. “It is a difficult regulatory environment to operate in. There are immense amounts of bureaucracy, which need to be dealt with. Unless you have credible partners who understand the legislative environment . . . it is something of a minefield.”

Without a local partner, individuals and companies operating in English might also find it difficult to do business in the DRC, where French is the lingua franca.