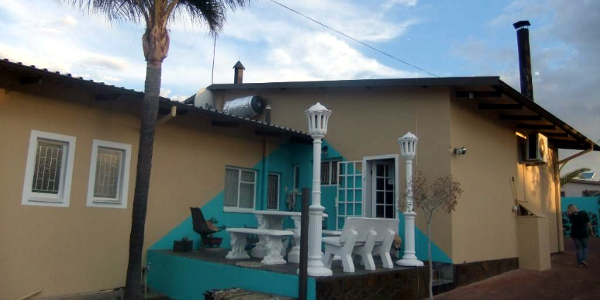 A house for sale in Academia, a suburb in Namibia’s capital Windhoek.

Housing sale volumes in Namibia have dipped considerably in a market that has enjoyed one of the world’s fastest-growing property prices for years.

According to the FNB Housing Index, the number of sales declined throughout 2016 (a result of less demand). And while housing price growth remained robust last year, real estate agents say shrinking sale volumes are now causing property prices to dip too.

According to Lourette Liebenberg – the principal consultant at real estate agency Rightmove Properties – the fall in housing demand is partly tied to the economic struggles facing neighbouring Angola.

Africa’s second-largest oil exporter has been suffering since the collapse in the oil price – which plummeted from over US$100 a barrel in mid-2014 to lows of about $27 in January 2016. But prior to this slump, many wealthy Angolans bought properties in Namibia – where they could access the quality medical services, schools and infrastructure often lacking in their home market (a result of 26 years of civil war). In addition, Namibian property was also seen as a low-risk, high-reward investment.

“The Namibian property market, and more specifically the Windhoek property market, outperformed South Africa’s and other neighbouring countries’ property markets. So [Angolans] regarded buying property in Namibia a sound investment,” Liebenberg told How we made it in Africa.

Many bought or rented properties close to the University of Namibia or colleges in Windhoek, and Liebenberg said Angolans were often prepared to pay more than the average Namibian.

“Middle class families sought properties in suburbs like Pionierspark, Hochlandpark, Academia, Windhoek West and Windhoek North, where prices range between N$1m to N$3m (US$75,000 to $230,000). They preferred properties that provided ample accommodation and, in many instances, then took in students to help carry the cost of households and to help Angolan families and acquaintances,” she explained.

“The more affluent Angolans bought houses in the most expensive suburbs like Ludwigsdorf, Klein Windhoek and Auasblick, where house prices can reach up to N$20m (US$1.5m). We experienced instances where youngsters brought in their full inheritance from deceased parents and spent all on fancy houses.”

About four years ago, Namibia’s central bank introduced stringent rules around the declaration of sources of funding for these investments, and Liebenberg said this had an effect on the number of Angolans buying property in Namibia. But it was the fall in global oil prices that aggravated the situation.

Oil accounts for 95% of Angola’s exports and the price slump severely reduced export revenues. This, in turn, has led to a depreciation of Angola’s currency (the kwanza), a shortage of US dollars in the market, and a fall in consumer spending power.

The effects of this can be seen in Namibia’s housing market. “Most Angolan buyers have disappeared, with the result that the most expensive houses sell slowly,” said Liebenberg.

“Where, in the past, we saw that Angolans paid a premium to purchase properties in excess of their sworn market values, that’s no longer the case, as they rely to some extent on local commercial bank bonds to purchase now. As a result, they have become more price sensitive.”

Dr Roman Grynberg, a professor of economics at the University of Namibia, said this fall in demand is mostly being felt in the middle to top end of the housing market.

“Prices have now started to fall. I mean, I bought the house I’m living in almost two years ago – it would be worth at least 10% less than what I paid for it,” he estimated.

On the rental side, middle class apartments ranging between N$6,000 and N$9,000 (US$450 – $680) per month, were hit hardest over the last year. Liebenberg noted: “Most [Angolans] paid a premium on rental prices, and landlords no longer have this luxury and have to drop rental prices to attract replacement local tenants.”

Lower rentals and vacancies also impact the overall valuation of a property.

“Most of them are saying they are going back home now. Their parents cannot afford to pay their accommodation and school fees,” said Munkanda-Katamba.

“Some of the properties have been empty for a couple of months now.”