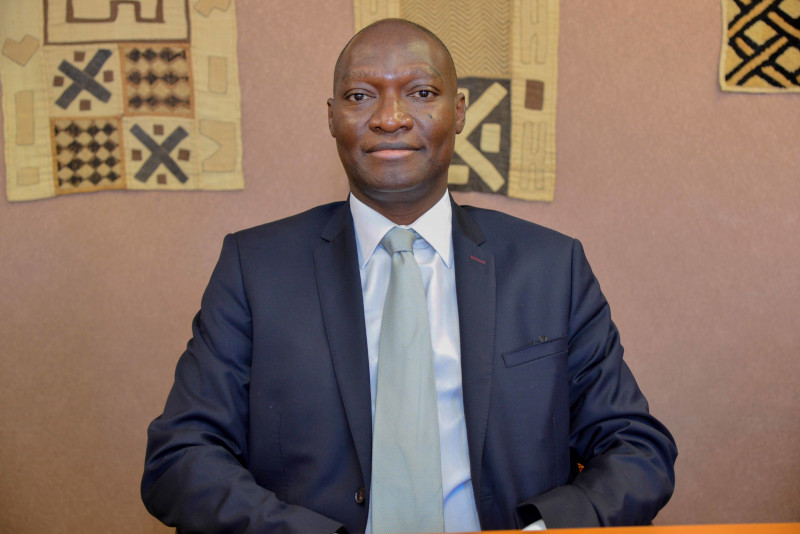 Cameroonian businessman and investor Cyrille Nkontchou is the founder and chairman of Enko Education, an African private schools business. Enko currently operates 14 schools across nine countries. Sven Hugo talked to Nkontchou about building the company, lessons learnt and some of the unexploited opportunities in Africa’s education sector.

Where does one begin to create an international private school network?

As background to the founding of Enko Education, I started an investment banking firm called Liquid Africa in 2000. As head of research for sub-Saharan African markets at Merrill Lynch, I figured it was time to get on the other side of the fence by investing my own money, which is really where the appetite for being on the investment side of business was born.

In 2009, I co-founded Enko Capital, an asset management business focused on investments in Africa. Today, we manage about half a billion US dollars invested in Africa in equity, private equity and fixed income platforms.

I seriously considered education as an investment in 2012. The decision was inspired by my mom, Justine, who many years ago had also set up her own successful school in Cameroon.

In 2012, we presented our idea to the Global Entrepreneurship Lab at the Massachusetts Institute of Technology (MIT), which assigns students to do research work on projects. We worked with MIT over a six-month period, including a month on-site in South Africa, to analyse the opportunities of our education model. From that study came the spark for Enko Education. It is where I met my business partner and co-founder, Eric Pignot, who was studying at the MIT Sloan School of Management at the time.

Our ambition is to get young Africans into reputable universities abroad. It became clear that even though African students were keen to study overseas, they struggled to get into good universities. If you don’t have a curriculum whereby international universities can compare your results against that of another applicant, the chances are slim that you’re going to be accepted, even as the best student in the country. We had to implement a curriculum whereby our students could be compared with other international applicants.

Quality education in Africa is costly and beyond the means of the majority of African parents. We, therefore, had to enter the market at a fraction of the cost of other international schools.

Take us through the process of setting up the first school.

Starting out, our vision for the business was still unclear. In 2014, we bought our first school in South Africa, which already had a local curriculum in place. It proved a bad investment. We owned a 40% stake in the school but our vision for the business was misaligned with the other stakeholder. Enko still owns the school but it’s an alien in our portfolio.

In the same year, we opened the first school in Cameroon, renting the building that my mom was using to train teachers for her school. It didn’t go as planned … we began the year with four students and eight teachers. Having said that, our first learners performed very well and we produced the first Cameroonian to ever go to Yale University. Financially, it was a disaster but the learning outcome was successful.

Why was the take-up so poor?

It was a difficult value proposition to explain to parents, especially with the unfamiliar International Baccalaureate (IB) curriculum. We decided to align with IB as it is an international curriculum that is not nation-specific.

Our school was also more expensive than the French, local-curriculum schools the parents already trusted. In Francophone African countries, the French schools are the most recognised and we were offering something new and more expensive.

When did Enko’s fortunes start to change?

After three years, we saw a turnaround. We hired the right people: young, dynamic individuals who believed in the business.

Proparco, an SME-focused investor, provided much-needed capital and helped us to institutionalise the business, putting in place a strong board that could give guidance and challenge us when necessary.

Over time, we refined our pitch to parents, who started believing in our vision. We also received a lot of support from the International Baccalaureate organisation, which saw merit in what we were doing. The organisation helped us fast-track our accreditation, which we managed to get in two years instead of the usual five. This helped validate the Enko promise in the eyes of parents.

We knew from the beginning it was going to take time to convince parents of the suitability of the International Baccalaureate curriculum.

The business model for the majority of our schools is based on the greenfield model, where we start schools from scratch in countries where the IB curriculum isn’t yet available.

When we identify a potential opportunity for a school, an Enko employee visits the premises we plan on renting and arranges authorisation from the local education authorities. This process usually kicks off in January, and by September we are ready to open the school. Typically, our schools open with 50 students, growing to 100 the year thereafter, and 150 the following year. Each school roughly takes three years to break even; it costs us about $600,000 from start to breaking even.

Apart from the greenfield model, we also bought two schools in Senegal, which were already up and running with the IB curriculum.

Today, we have 14 schools, of which the majority began as greenfield schools. Three of these were acquired. Two years ago, we started with a new Enko-managed model, which is becoming our new source of growth. Under this model, we manage the school on behalf of the owners.

What are the major challenges of running this business?

We don’t own the school premises, so we can go to market much faster than building a school from the ground up. However, this becomes an issue when the schools grow and the premises are not specifically built to accommodate this growth.

At the moment, our schools are profitable but constrained by capacity. We are searching for a way to have purpose-built infrastructure with higher capacity; where we can find partners specifically interested in owning and building school real estate, while we manage it. 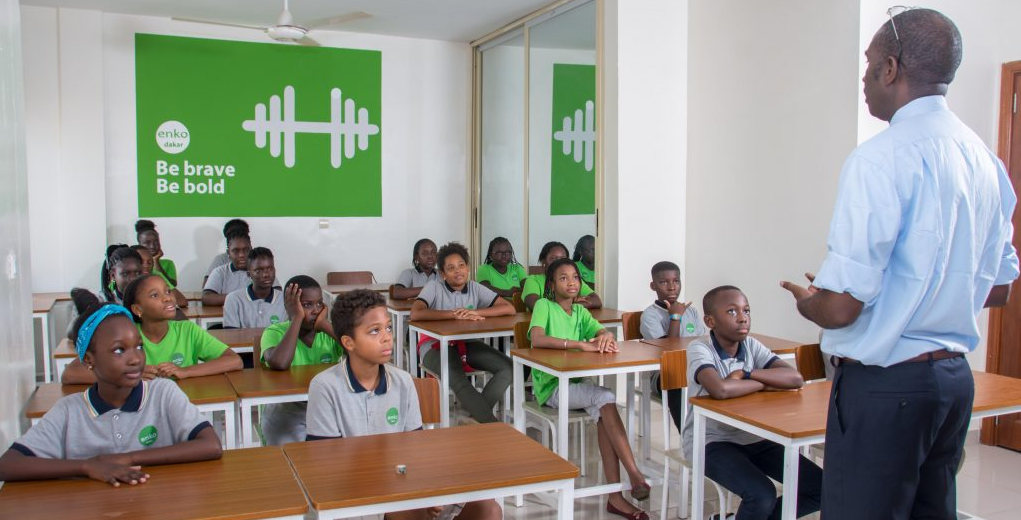 An Enko classroom in Dakar, Senegal

Which income bracket do you cater for?

Enko Education caters largely to locals, unlike our competitors that target expats. If you look at a typical international school, about 90–100% of pupils are expats, which means their parents can afford the $20,000 to $40,000 annual school fees.

Our tuition fees are about $3,000 per annum and most of our parents are in the upper-middle-class bracket, which includes people who typically earn between $55,000 and $60,000 a year.

How are you able to offer these competitive fees?

We have a couple of levellers. Infrastructure is the biggest expense in running a school. For example, a school like St Stithians in Johannesburg, South Africa will have a property value of hundreds of millions of rands. Our competitors have to justify their expenses and they link that to fees. We don’t get involved in real estate.

Leasing has two implications: capital expenditure and time to market. We don’t mind starting in premises with low capacity and then moving to a bigger place once the school is full.

The largest operating expense is the cost of teachers; we usually have one teacher for every 10 students. To control this cost, we build capacity rather than merely hiring expats. We make an effort to identify talented local teachers and provide the training they require. Most are locals and we invest in the personal development of our teachers.

Nigeria is the biggest market. We’re currently working on a project there with capacity for 3,000 pupils. In the next five years, we are aiming for 10,000 students in our schools across Nigeria.

The Enko value proposition works in markets where there is not much on offer in the way of international schools. Mozambique and Angola are prime examples. Kenya, for instance, is a large market but competition is intense, which we tend to shy away from.

Our bread and butter are still the smaller French-speaking African markets. We’ll keep penetrating these and get more schools into these countries. Eventually, we are aiming for five to six campuses in each of the Francophone countries.

In addition to Enko’s offering, what other opportunities do you see in Africa’s education sector?

Education-focused technology (edtech) is showing big potential for remote learning but that is on a global scale and not unique to Africa. Edtech becomes more relevant in higher education, where there’s even more room for leveraging technology. Consider that most universities have moved online due to Covid-19 and have done so successfully.

In Africa, there are opportunities in related services, such as student accommodation. And there’s a lot of potential in financing education. If you develop the capacity to spot students who can do extremely well and invest in them, it can be profitable and it’s possible to change the face of Africa. Intelligence is spread equally, the problem is financial means, especially in Africa.

If you had the chance to start this business again, what would you do differently?

Our initial mistakes prompted us to make the right adjustments but we probably should have raised more money in our early rounds of fundraising. Growth plans become challenging if capital dries up; it forces you into more fundraising or slows your progress. You have to raise more money at the beginning than you think is necessary.