While crude oil production has contributed greatly to the economic growth of many African countries, the average man on the street has often not benefited from the industry. In a country like Nigeria, an unhealthy focus on oil has also led to the neglect of sectors such as agriculture. 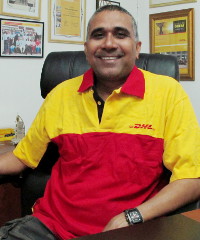 With a number of new oil discoveries across the continent, many countries are aiming not to repeat the mistakes of the past, and use oil as a means to promote inclusive prosperity.

Ghana started with offshore oil production towards the end of 2010, and the industry has been responsible for much of the country’s rapid economic growth in recent years. GDP growth decelerated from 14.4% in 2011 to 7.1% in 2012. The economic growth peak in 2011 was due to the start up of oil production. Ghana’s medium-term outlook remains healthy, with projected GDP growth of 8% in 2013 and 8.7% in 2014.

One company that is proud to be a vibrant part of this journey is DHL Global Forwarding (DGF), a division of Deutsche Post DHL, providing air and ocean freight forwarding services.

According to Pramod Bagalwadi, country manager of DGF in Ghana, the country’s oil sector is becoming an increasingly important part of DGF’s business. “In terms of oil and gas it looks very positive for us over the next five years.”

However, Ghana’s gold mining industry will continue to dominate and remain the key contributor to DGF’s business for the foreseeable future.

Bagalwadi says so far the oil industry has had a varied impact on the country. On the one hand it has strengthened Ghana’s middle class. Oil is attracting an increasing number of foreign businesspeople to Ghana, which is stimulating local industries such as hospitality and property development

On the other hand, the increase in numbers of foreigners has led to a rise in the prices of goods and services, often making them unaffordable to local Ghanaians. Bagalwadi says in the town of Takoradi, the nearest port to Ghana’s offshore oil fields, property prices have skyrocketed.

Takoradi has been attracting significant interest in recent years. Hotel brands such as Protea and Best Western have announced new facilities in the area. Last year the Renaissance Group also said it will develop a new mixed-use urban development, called King City, to be located 10km from the port. The port facilities are also being upgraded to accommodate increased sea traffic. Takoradi’s local magazine is aptly named Oil City.

However, some think many of the oil industry staff will continue to be based in the capital Accra, rather than locating to Takoradi. “The little research that I have done tells me that a lot of these companies that are coming are still maintaining a huge presence in Accra, and most of their people are still here,” notes Harry Quartey, CEO of residential property development company Emerald Properties.

Bagalwadi says because Ghana’s oil industry is relatively new, few local people currently have the relevant skills to participate. However, he expects this to change over the next five to 10 years. Local companies providing services to the oil industry are also set to thrive once the government’s local content policy is fully implemented

He also calls for greater trade efficiencies in the Economic Community of West African States (ECOWAS) region, where it is still difficult to move goods across borders.

For Bagalwadi, one of the best things about doing business in Ghana is the country’s good security. “I have worked in a number of African countries and can say that Ghana has among the best security in the continent. Ghanaians are determined but not confrontational people and easy to work with, they are hungry for additional qualifications and with some support this quality will take them a long way.”

He says the country’s relatively developed democracy is also a big plus. “Ghana is one of those African countries where democracy is visible. Politically the country is very stable, and that allows companies to more easily manage their investments in the country.”