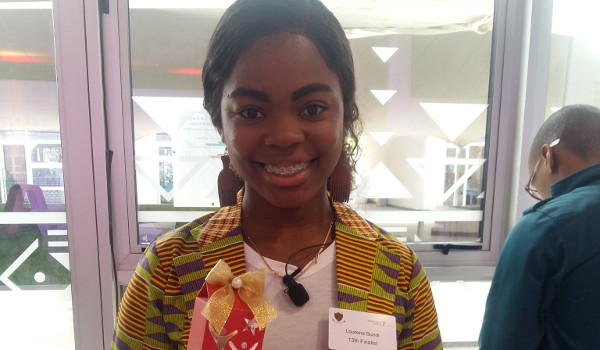 Africa’s population will double within the next three decades to an estimated 2.5 billion, with one billion being youth. According to United Nations data the continent is expected to account for more than half of the world’s population growth between 2015 and 2050.

The International Monetary Fund stated last year in a blog post that by 2035 sub-Saharan Africa, for example, will have more working-age people than the rest of the world’s regions combined.

Various organisations have commented that this population bulge is an unprecedented crisis in the making if these young African men and women are uneducated or unemployed.

Not everyone believes that it is an unavoidable catastrophe. For a group of young women, all below the age of 23, it is a call to action to start creating jobs.

Alina Karimamusama, Amanda Jojo, Farah Emara, Joan Nalubega, Kondwani Banda, Lourena Bundi, Melissa Bime, Nomena Andrianantoandro and Vanessa Ishimwe have all been selected to be part of the group of 20 Anzisha Prize fellows of 2018, an annual entrepreneurship development programme offered by the African Leadership Academy and the Mastercard Foundation.

“I don’t think the future holds anything for African youth, unless they create it,” says Ishimwe (22). “They say the best way to predict or foretell the future is by creating it.”

What all these women have in common is an understanding of their own responsibility to shape the continent in the next few years and spotting an opportunity where others could possibly see only obstacles.

For Alina Karimamusama (21), from Zambia, the challenges of gender equality and the economic marginalisation of women in her country drove her to set up Youth Arise – an organisation empowering women with computer, communication and entrepreneur skills. She was only 16 at the time.

Once trained, the women are connected to local businesses for apprenticeships and on-the-job-training. Those interested in entrepreneurship are given space to sell their products at local markets.

“I always say creativity is the new gold of Africa, and I worship the concept of my people using initiative, skill or talent, passion and creativity to turn their ideas into an income.  So many youth are refining that creative gold into entrepreneurship, and together we will reduce the level of unemployment in African countries,” she says.

Providing education and entrepreneurship training to refugees in Uganda

Vanessa Ishimwe’s non-profit organisation, Youth Initiative for Development in Africa (which she started in 2014 when she was only 18 years old), educates the youth and creates job opportunities in a Ugandan refugee camp. She credits her knack for entrepreneurship to the fact that she has always had a spirit of learning – whether from someone younger, her peers, or a mentor. Ishimwe was born in Rwanda, but fled to Uganda with her mother following the death of her father at the age of nine and grew up in Kyaka refugee camp in Uganda. Her own experience is what motivated her to create opportunities for other refugees.

“If you need to learn – do it with all your heart. If you are practicing running as an athlete – do it will all your heart. When the African youth get up and start doing what they are supposed to do, but with all their heart, then Africa won’t just have good enterprises, but also great leaders,” she says.

Melissa Bime (22), founder of INFIUSS in Cameroon, says she is optimistic about the opportunities that are currently available for entrepreneurial youth. “Never before have I been in an environment where everyone is so determined to – one way or another – solve different problems or simply prepare themselves to become the next generation of African leaders.”

INFIUSS is an online blood bank and digital supply chain platform. Bime, a nursing graduate, founded it after she witnessed too many patient deaths due to the lack of compatible blood for life-saving transfusions whilst working in a Cameroonian hospital.

“I grew up in a home where a single mother single-handedly raised my sisters and I. My sisters both went on to be very successful in their respective fields, and so I had positive role models to look up to. One of the most important lessons I learnt in my early childhood was to go after what I wanted as no one was going to provide that for me,” she says.

Linking artists with clients, boosting street art along the way

For Farah Emara, co-founder of Jidar Wall Art in Egypt, the continent’s breath-taking landscapes and vast wealth of natural resources are testament to the potential that it holds. “We can go places with the right investment in Africa’s young entrepreneurs,” the 20-year old artist and student from Cairo says. Jidar Wall Art is creating a network and sales channel in Egypt for artists. When Emara looks at a city wall in the streets of Cairo, she sees a blank canvas that could elevate an artist’s career.

Farah has signed on 30 clients and, along with her business partners, plans to grow the venture even further.

Amanda Jojo (21) is the founder of the Trea Garden, a coffee- and teahouse in an urban suburb in South Africa. Along with finding start-up finances, she lists having access to coaches and mentors as her biggest challenge as a young entrepreneur. Her age is another obstacle she has had to overcome due to perceptions in the marketplace: “The second biggest challenge is people not taking me seriously in my industry, because I am a black 21-year old owning and managing this establishment.”

Jojo believes that Trea Garden is more than just about selling food and beverages – it is about mental wellness as well. Jojo herself has had to battle mental illness due to circumstances in her past. She dreams of being able to create a space where people can receive free mental help.

For Nomena Andrianantoandro (21), a life-long passion to promote healthier consumption patterns in her home country, Madagascar, led to the creation of BOISSA, a company that produces healthy fruit juices. BOISSA drinks are made from 100% natural ingredients, without dyes or preservatives and are hand-pressed.

Filling a gap for kids parties in Luanda, Angola

Lourena Bundi (21), founder of L&C Buffet Infantil, was asked to arrange a baby shower for her cousin in 2015, in Angola. It immediately occurred to her that there were a limited variety of party planners for parties for young children and used her organisational and creative skills to bridge that gap.

She manages a team who executes, on average, two to three events per week. Since opening in 2015, L&C Buffet Infantil has organised over 199 events in Luanda.

A hunger to create a solution for her most painful childhood experience is what made Joan Nalubega, the 21-year founder of Union-Ganics (Uganics), the entrepreneur she is today. As a young child, living in an orphanage in Uganda, Nalubega at one stage felt “ready for death” due to suffering from malaria. “My survival was my motivation and influence to start Uganics,” she says of her company that produces anti-malaria products, such as a long-lasting mosquito-repellent soap.

Early the Uganics team realised that the primary target group would not be able to afford their products, even if it was sold at zero mark-up. They adapted their strategy to subsidise the product by selling it to high-end safari lodges and hotels with their ecologically and socially conscious guests as an organic mosquito repellent soap, with social benefits.

This idea has proven to be so successful that the company now has to raise funds to more equipment to meet the need.

“It is not easy being an entrepreneur. It requires a lot of courage in the beginning, persistence, patience and most importantly, believing in yourself,” she says.

Kondwani Banda (21), founder of Mainstream Media – a free, fully interactive digital magazine in Zambia – admits that the going does get tough as a young entrepreneur. “There are days when you will feel like you have no idea what you are doing. Or you will feel defeated: even more so when you are a young mother such as myself. You have to push twice as hard and work twice as smart, to be that success story in a world that often looks down on you.”

Banda is a media and communications’ major at the University of Zambia and aims to tell authentic African stories through the magazine, which focuses mainly on culture, entertainment and human interest stories. Mainstream Media now has 500 registered subscribers and a social media following of 15,000.

The Anzisha Prize, and its accompanying fellowship, is in its eighth year. It is a partnership between the African Learning Academy and the Mastercard Foundation. You can vote for any of the finalists for the People’s Choice Award and tune in to watch the events when they are live-streamed.