Mobile phone technologies are presenting Africa’s smallholder farmers with an unprecedented opportunity to run their operations more productively and to grow their own income levels. 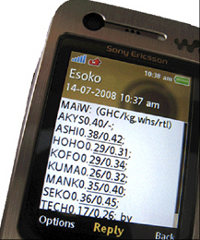 Private companies, budding IT entrepreneurs, non-governmental organisations (NGOs) as well as governments are all involved in a variety of mobile phone-based products, services and applications (small software programmes that users can access on their handsets) aimed at boosting small-scale agriculture.

One of the largest challenges traditionally experienced by Africa’s smallholder farmers has been a lack of transparent information about the market prices of crops. A number of new mobile phone-based services is, however, addressing this problem by giving farmers access to market prices, enabling them to negotiate better deals with traders and improve the timing of getting their crops to market. These services typically include a function where famers can send a SMS text message to a specific number which then gives them wholesale and retail prices of crops.

Mobile-based market information systems have been around for a while. According to a document published by the Forum for Agricultural Research in Africa (FARA), some of the first services were launched as early as 2002. The success of these earlier services has, however, been haphazard, largely because of lower mobile penetration rates at that stage as well as a lack of a viable business plans behind many of the projects. “A lot of the projects are donor funded and they haven’t got a viable business model on the other end. Once the funding runs out the ability to sustain the project or . . . application disappears,” says Matthew de Gale, ICT services manager at the Southern African NGO Network (SANGONeT), an organisation also involved in developing mobile applications for farmers.

The explosion of mobile phones on the African continent and much reduced data costs, has led to the development of improved products for farmers.

One of the most successful technologies is arguably the Esoko service developed by Ghana-based BusyLab. Orginally established in 2005 as TradeNet, the company was rebranded as Esoko in 2009, operating on a new platform with a broader set of tools. In addition to providing access to market prices, farmers and traders can also place buy/sell orders. Esoko has attracted investment from the International Finance Corporation, the Soros Economic Development Fund and well-known Silicon Valley engineer Jim Forster. Through a variety of partnership agreements, the company currently has a presence in nine countries on the continent.

“I think the potential to transform value chains and market access through mobile is enormous,” Forster said at the time of announcing his investment. “I believe this doesn’t need to be about aid in the sense we know it now. Here’s a local company building an innovative product to meet a local need and selling it in a profitable way. That’s how I want to see Africa develop its own markets and capacities, and that’s why I decided to support Esoko.”

Many of the new applications go beyond merely providing farmers with market information. Kenya’s M-Farm, developed by an all-girl team of developers, allows farmers to group together through their mobile phones to offer exporters and big retailers large quantities of crops. Farmers connected through M-Farm can also save on the cost of inputs such as fertilisers and pesticides by buying in bulk.

Earlier this month, in Ghana, the pilot phase of a programme called CocoaLink was launched by the Ghana Cocoa Board (COCOBOD), chocolate manufacturer The Hershey Company and the World Cocoa Foundation (WCF). The programme uses mobile technology to connect cocoa farmers with useful information about improving farming practices, farm safety, crop disease prevention, post-harvest production and crop marketing. Through voice and SMS messages delivered in their local language or English, cocoa farmers will receive the information at no charge. They also will be able to share information and receive answers to specific questions relating to their cocoa farming livelihoods.

In the area of livestock, SANGONeT is involved with an application that allows small-scale dairy farmers in East Africa to record the lactation history of their cows. This allows farmers to increase the sale price of their animals.

Mobile phones are also being used to distribute agricultural insurance products to farmers, most of whom cannot afford conventional insurance. A product called Kilimo Salama, Swahili for ‘safe agriculture’, enables smallholder farmers in Kenya to insure their agricultural inputs against adverse weather conditions, such as drought or too much rain. Developed by UAP Insurance, the Syngenta Foundation for Sustainable Agriculture and mobile operator Safaricom, Kilimo Salama allows smallholder farmers to insure as little as one kilogramme of maize, seed or fertiliser. To be covered under the scheme, farmers only need to pay an extra 5% for a bag of seed, fertiliser or other inputs.

Mobile technology plays a central role in the scheme as it is used both for registration of new policies as well as for payouts. Kilimo Salama is distributed mostly through agro dealers that have been equipped with a camera phone that scans a special bar code at the time of purchase, which immediately registers the policy with UAP Insurance over Safaricom’s mobile data network. This innovative application then sends a SMS message confirming the insurance policy to the farmer’s handset. Payouts are determined by automated weather stations that monitor the rainfall. Based on the stations’ measurements and a predefined formula of crop rainfall needs, payouts are automatically made to farmers using Safaricom’s mobile money transfer service M-PESA. Farmers don’t have to fill out any claim forms. Since its official launch in 2010, the scheme has already made payouts to numerous farmers. Other insurance companies have since also introduced similar products.

It is expected that products like Kilimo Salama will increase productivity since only about half of Kenyan farmers invest in improved seeds and soil inputs. A key reason for the low demand is the fear among farmers that poor conditions, such as drought, will render their investment worthless, robbing them of both their crops and their savings.

“This ‘pay as you plant’ type insurance allows farmers to try out insurance, a product they have never bought before and which has a negative reputation in Kenya,” said the Syngenta Foundation in a statement. “Experience shows that as farmers learn to trust insurance, they expand their coverage and are comfortable investing more in their farm, raising their productivity and increasing their food security.”