Jeff Nemeth, president and CEO of Ford Southern Africa, inherited an unmotivated and unproductive workforce. However, through an innovative approach, he managed to greatly boost the workers’ morale and productivity. 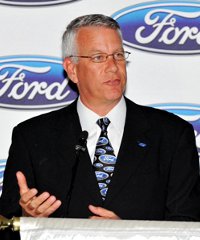 Before he was assigned to South Africa, Nemeth spent nine years working for Ford in Asia. “My workers in Asia were some of the most industrious that I have ever seen. And when I was given this assignment, my colleagues said, ‘Oh boy, you are going to South Africa, it’s hard, it’s challenging, the skills levels are low, the productivity is low, labour is expensive, good luck …” he said during the Ernst & Young Strategic Growth Forum Africa in Cape Town.

“What I found in walking through the plant is our workers were like the walking dead. They would just be shuffling, they wouldn’t make eye contact.” However, when he started talking to them, he realised that they actually “wanted to build good cars, they wanted to work hard, they weren’t trying to avoid work”.

In order to motivate the workforce, Nemeth sent 250 of his workers to Ford’s plant in Chennai, India – one of the company’s top plants in terms of productivity. Although the Ford factory in Germany is the most productive, Nemeth felt that his staff would better relate to workers in India, who lived in similar circumstances than them.

The experiment proved to be a huge success. “They spent two weeks, they learnt team building, the learnt empowerment, they came back here, those 250 pollinated our whole workforce. We now have empowered work groups – groups of 12 people that run their own part of the business. We went from being the least productive plant to being middle of the pack … But more importantly … There are 110 Ford plants in the world. We were third-worst in quality … we are now third-best in quality in 18 months.”